Ted Cruz and his father have “satanic” tones. That’s what you get from the taxpayer-subsidized PBS NewsHour, established so somewhere on TV, people are civil and don’t....insult each other as Satan?

Pseudo-conservative New York Times columnist David Brooks has a swelling, itching hatred of Senator Cruz, and it was time to scratch as Cruz begins to surge in the polls:

JUDY WOODRUFF:  David Brooks, among the so-called establishment Republicans, they’re taking more potshots at one another. You’re hearing a lot of back and forth between Rubio and Cruz, between Rubio and Christie. So, what’s going on over there, or is anybody making any headway among that group?

DAVID BROOKS: Yes, Ted Cruz is making headway. There’s — you begin to see little signs of liftoff. Trump has sort of ceiling-ed out. Carson is collapsing. And Cruz is somehow beginning to get some momentum from Iowa and elsewhere. And so people are either mimicking him, which Rubio is doing a little by adopting some of the dark and satanic tones [he’s using quote-mark fingers] that Cruz has, and so…

WOODRUFF: What did you — let me just ask, what did you just say? (Laughter)

Certainly, part of that “apocalyptic” talk about enemies is about ISIS and al-Qaeda, and even Hillary Clinton is pledging to “destroy” ISIS. You won’t find Brooks suggesting Hillary sounds “dark and satanic.” Instead, as usual, the liberal half of the PBS roundtable – in this case, radical Mother Jones writer David Corn – adds the “your Dad is Satan, too” touch to the “civil” proceedings on PBS: 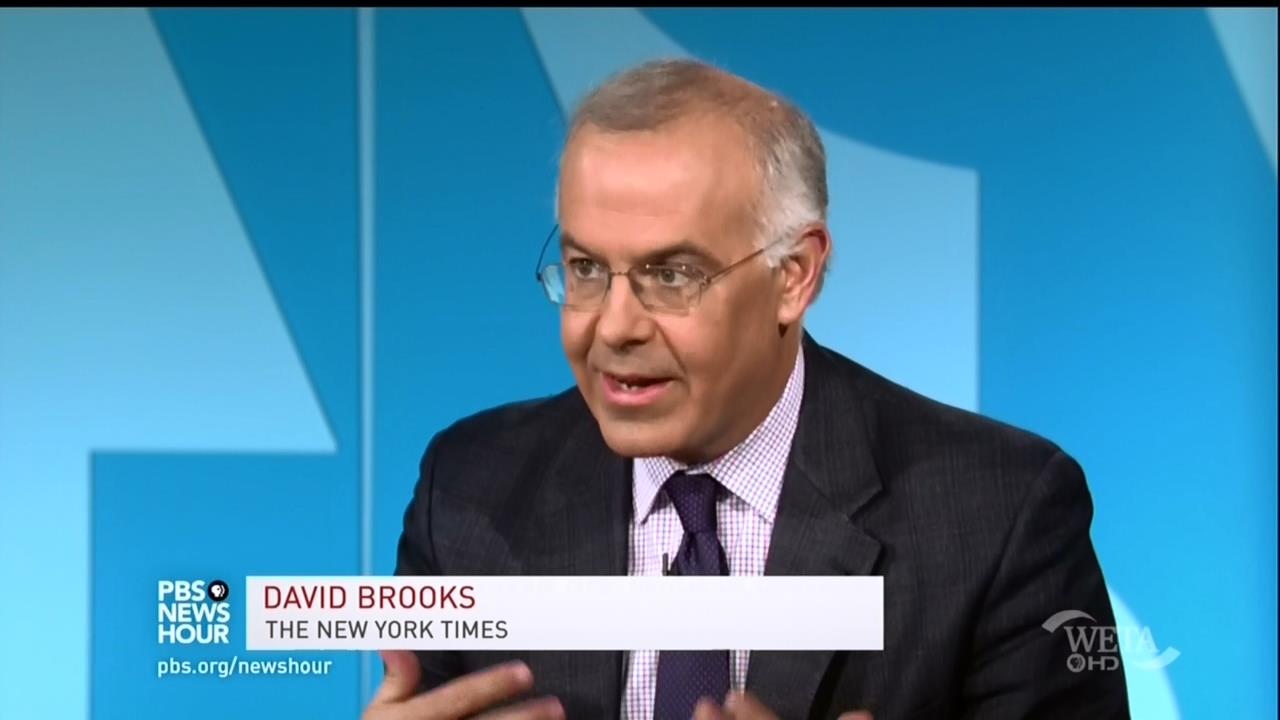 DAVID CORN: “Well, actually, if you go to a speech from his dad, who is a pastor, evangelical, Rafael Cruz, it actually is satanic. (Laughter) He — I watched a speech in which he said Satan was behind the Supreme Court decision to legalize gay marriage. So, it’s not…

BROOKS: OK. Well, I withdraw the satanic from Ted Cruz.

BROOKS: Mephistophelian, maybe. (Laughter)  But it’s dark and combative, and, frankly, harsh. It’s a harsh — he gets some jokes in the beginning, but then it’s just, we have enemies. We’re in an apocalyptic situation. We’re on the edge of the abyss. You need a tough guy to beat that back. And that’s his personality.

Brooks was worried that Marco Rubio would look inauthentic by copying the “satanic” tone. Brooks said Cruz “just has a straighter line to the nomination. I think his personality is not ideal for a candidate in likability, but -- I'm trying to compensate for my past crudeness.”

PS: As usual, Brooks offered a version of his PBS banter to NPR's All Things Considered on Friday afternoon: "Ted Cruz is being authentic. He is authentically nasty, egomaniacal, combative. If you watch his speeches, he wants to stomp on those people, bomb those people, shoot those people. That's authentic to him. It's not authentic to Marco Rubio."

The "NPR conservative" also offered this bumper-sticker sentiment: "I support every piece of gun control legislation you can imagine. I just don't think it will do much good."