At Salon, Amanda Marcotte, one of America’s leading deniers that babies are somehow involved in abortions, turned her talent for dehumanizing people to Twitchy for mocking Hollywood writer-director Joss Whedon’s volunteering to put six figures of cash behind Planned Parenthood.

"Whedon will chip in an extra $50 (up to $100,000 total) to power the fight for women's health and rights," the abortion conglomerate wrote on its donation page. 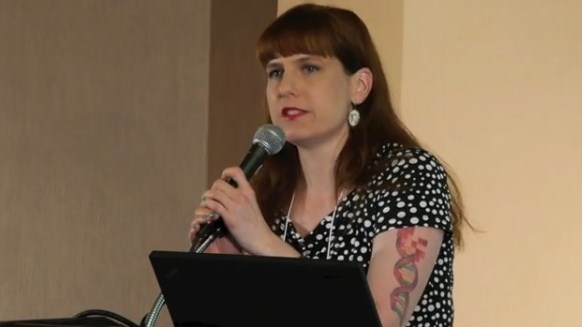 This announcement got the usual trickle of angry right wingers, mostly men, hollering stuff about “baby-killers.” [Don’t you know they devote 97 percent of their visits to giving condoms to middle-schoolers?]

Things kicked into high gear when Twitchy decided to highlight the tweet. "Twitchy, a site started by Michelle Malkin, portrays itself as a news site, but in reality, its main purpose is harnessing the masses of bitter, angry right wingers online and turning them into an army of social media flying monkeys." Twitchy picks the targets and aims the angry, grammar-challenged masses like a firehose, attempting to silence and torment liberal figures into silence through an astounding torrent of abuse.

Whedon himself isn’t on Twitter — he considers it a distraction from writing — so the villainous Twitchy masses are simply tweeting abuse at the Planned Parenthood account and under the hashtag #josswhedon, in clear hopes that he sees it and gets intimidated anyway.

Planned Parenthood calls this, “Shiny,” which is a quote from Whedon’s “Firefly” TV series and means “cool.”

So, since we’re quoting “Firefly” characters, we’re reminded of this exchange between Captain Malcolm Reynolds, played by Nathan Fillion, and the assassin sent to kill Reynolds and his crew:

The Operative: There are a lot of innocent people being killed in the air right now.
Capt. Malcolm Reynolds: You have no idea how true that is.

A lot of innocent people being killed on the ground right now, too.

All that followed from Marcotte was some college-sophomore attempts at rewriting Joss Whedon scripts to match her cartoonish views of what pro-life advocates prefer instead of the “space-age medical care” she favors:

“Firefly”: Attempts to build a human colony in outer space are derailed when space syphilis wipes out 90% of the human population. They may have spaceships, terraforming technologies and space age medical care, but no one could find a condom in the 26th century, where it was decided contraception services had to be shut down lest anyone be accused of “baby-killing.”

“The Avengers”: Earth is decimated by an alien invasion. Black Widow had the capacity to help shut down the wormhole that the evil aliens were entering Earth’s atmosphere through, but because she decided at the beginning of the film to “opt out” by marrying Steve Rogers and becoming a housewife instead of having a high-powered career as an Avenger, she simply wasn’t on hand to save the world.

As the nation's most uptight feminist, she probably wouldn't want people to think that if she opposes the "flying monkeys" of Twitchy, that makes her....Dorothy, just off the bicyle from Kansas? (Where there are far too few abortion clinics, no doubt.) That is, if Dorothy rejected God as a fiction and got some empowering tattoos.