Too Rotten to Be True: Houston Mosque Arson Was Set by a Mosque Regular, Will Media Retract?

For days now, the major media and left-wing blogs have followed an arson at a Houston mosque on Christmas Day. Some were briefs, but some carried statements from the local chapter of the Council on Islamic-American Relations (CAIR) calling for a “hate crime” investigation.

Online, NBC News is reporting that the arsonist was a Muslim who attended services at the mosque. Another phony “hate crime” stunt meant to embarrass the “haters”: 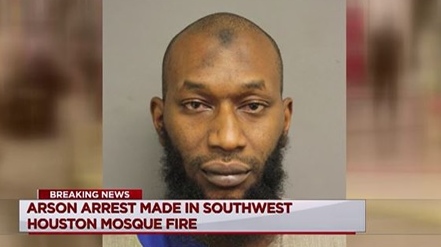 The suspect in a "suspicious" fire at a Houston mosque is an adherent who attended services there, officials said Wednesday.

Gary Nathaniel Moore, 37, of Houston, was arrested Wednesday morning for the Christmas Day blaze, a spokeswoman for the Bureau of Alcohol, Tobacco, Firearms and Explosives told NBC News.

Moore told investigators he had attended the mosque for five years, coming five times a day to pray, reported The Houston Chronicle. MJ Khan, president of the Islamic Society of Greater Houston, confirmed at a press conference Wednesday afternoon that Moore did attend prayer services there, but added, "I wouldn't call him a regular."

Advocacy groups believe there has been a spike in anti-Muslim incidents across the United States in recent weeks that can be linked to the mass shooting in California and the inflammatory rhetoric of Donald Trump and other Republican presidential candidates. And they say that Muslims are fearful the backlash could lead to further harassment and violence.

"The spike began with the Paris attacks and has intensified with what happened in San Bernardino and now with what Donald Trump is proposing," Ibrahim Hooper, lead spokesman for the Council on American-Islamic Relations, previously said. "I have never seen such fear and apprehension in the Muslim community, even after 9/11."

It's hard to measure the extent of the problem. The FBI, which keeps statistics on hate crimes committed nationwide, counted 154 bias offenses against Muslims last year.

Fox News covered the story online. CNN carried an assortment of briefs online and on air, and then New Day interviewed Muslim activist M.J. Khan on Monday. Anchor Christine Romans asked for a rundown of what happened, and then turned to the CAIR party line:

ROMANS: The Council on American Islamic Relations says there's been an uptick in violence targeting Muslims in the U.S., blaming the political environment. This is what the group said. "Because of the recent spike in hate incidents targeting mosques nationwide, we urge law enforcement authorities to investigate a possible bias motive for this fire." Are you concerned about the rhetoric nationwide on the political - on the campaign trail? Are you concerned about an anti-Muslim bias in the country now?

M. J. KHAN: Well, first of all, we, as Muslims, we are required not to get into rumor mongering or speculation. Let authorities take care of whatever the investigation they do. And once the investigation is complete, we can assure you that if it was not accidental, the Muslim community will have the compassion in their heart to forgive the people who are behind even the attack on the mosque

CAIR attributed a recent unprecedented spike in hate crimes directed at mosques and Muslims nationally at least in part to rhetoric by Republican presidential candidates. Billionaire Donald Trump called for a complete ban on Muslims entering the U.S. and for surveillance of certain mosques. Ben Carson raised objections to a Muslim becoming president.

"I get emails and calls from parents saying we need more security," said Hamed Ghazali, director of the Houston Quran Academy, part of the Katy-area center. "We tell them we're doing our best."

On the Internet, Jezebel, Talking Points Memo, and Think Progress grabbed the story. Think Progress placed its story under an AP photo of protesters with a sign reading “SAY NO TO SYRIAN REFUGEES.”

But the winner for obnoxious left-wing blogging goes to “Doktor Zoom” at Wonkette, who posted under the headline: "How Many Mosques Did You Burn For Jesus’s Birthday?"

In Houston, Texas, some brave soul kept Texas safe from the threat of Creeping Sharia by setting a mosque on fire on Christmas, in keeping with Isaiah 9:6, “For unto us a child is born, unto us arson is given.” Investigators say the fire at the small mosque, located in a strip mall, had multiple ignition locations and was likely intentionally set. The two-alarm blaze broke out about an hour after Friday evening worship services attended by roughly 200 people. Much of the rear of the mosque was burned; worshipers have moved to an empty space in the same shopping plaza until repairs can be made. Several other businesses in the shopping center were damaged by smoke.

Mustafaa Carroll, the executive director of the Houston branch of the Council on American-Islamic Relations, called on authorities to investigate the fire as a hate crime....

That seems like a pretty good bet, all right. But really, couldn’t you just as easily say they were the flames of liberty, kindled in the true American heart of someone who just wants his country back?