The New York Times is transparently panicking about republican-backing billionaire Sheldon Adelson’s secretive purchase of the Las Vegas Review-Journal. In a Monday article by Barry Meier and Sydney Ember, they strongly imply that it’s okay when billionaires buy newspapers, as long as they don’t tilt the political playing field to the right: 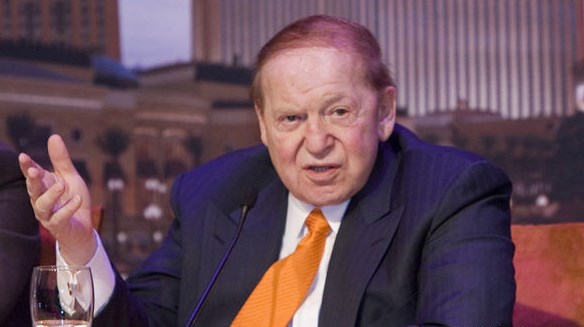 Billionaires buying newspapers is nothing new. In recent years, Jeffrey P. Bezos, the founder of Amazon, acquired The Washington Post and John Henry, a former commodities trader, purchased The Boston Globe. Media watchdogs routinely question whether new owners will use papers to advance their personal agendas, but both of those transactions have been beneficial for the publications.

However, across Las Vegas — and inside the Review-Journal newsroom — there are heightened concerns about the paper’s direction.

“The purchase of the Review-Journal signals a tectonic shift in the political landscape of Las Vegas and Nevada and has the potential to reverberate all the way to the White House,” the Review-Journal columnist John L. Smith wrote last week. Mr. Smith filed for bankruptcy in 2007 while defending himself in a libel lawsuit brought against him by Mr. Adelson, who eventually dropped the case.

The Times thinks liberal billionaires buying newspapers and keeping them liberal is “beneficial to the publications” and not to “advance their personal agendas,” as if a liberal keeping a newspaper liberal isn’t a personal benefit. After all, just because the Times bought the Boston Globe for $1.1 billion and sold it to the aforementioned John Henry for $70 million doesn’t mean liberal newspapers aren’t thriving, right?

They also worry because Adelson has used his Israeli media holdings as a “powerful weapon” to defend Bibi Netanyahu:

Mr. Adelson has already become a newspaper force in Israel, the country where his wife was born. In 2007, he started a free daily there, Israel Hayom, and has used it as a powerful weapon in support of the country’s prime minister, Benjamin Netanyahu. Mr. Adelson added to his Israeli newspaper holdings last year when he bought a small religious publication, Makor Rishon. The Adelson Family Foundation has provided hundreds of thousands of dollars in financial support to JNS.org, a Jewish news service based in the United States, according to public records.

It’s quite clear the people at the Times know that media holdings can be a “powerful weapon” to play with in politics. But the Sulzberger family isn’t trying to make America liberal as a selfish thing: that’s apparently “beneficial for the publications.” But “some observers” – liberal observers – tell the Times that this is all selfishness on Adelson’s part:

Some observers say that Mr. Adelson might use the Nevada paper to promote his political allies and protect his extensive gambling interests in Las Vegas, which include the Venetian and Palazzo hotels, and the adjoining Sands Expo convention center. His company also operates hotels and casinos in Bethlehem, Pa., Macau and Singapore.

“I don’t think anyone thinks he is doing this to benefit the Las Vegas community or Clark County,” said Alan Deutschman, a professor of business journalism at the University of Nevada, Reno. “Everyone thinks this is in his self-interest.”

That’s the same Alan Deutschman who wrote a gushy tribute to leftist billionaire George Soros at Salon.com – but that doesn’t mean the Times can’t pass him off as nonpartisan.

Eric Fettman of the New York Post notes on his Facebook page: “You know, for all the furor over Sheldon Adelson buying the Las Vegas paper and not disclosing he'd done so, it's happened before. The successful bidder here didn't reveal himself until two weeks later. He was Eugene Meyer, father of Katharine Graham.” He bought The Washington Post in 1933 for $825,000.