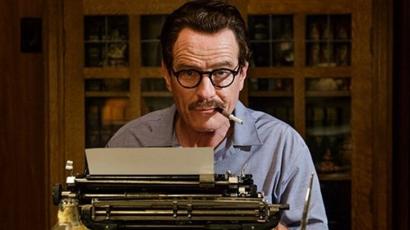 The headline was "Blacklisted screenwriter offers lesson in resilence." The book being reviewed came out in 1977, and the author died in 2003. So the only reason for a book review is to promote the movie...and Trumbo. (Unsurprisingly, there's a new paperback edition playing off the movie.)

Dirda oozed “by the time of his death from lung cancer in 1976, Trumbo already seemed half-legend, half-saint: To Cook, he wasn’t just the Oscar-winner who broke the blacklist, he was a man who, no matter what, kept faith with himself, his friends and his ideals.”

The reviewer started with the “pinko” wisecrack: “the Hollywood Ten were sentenced to six months to a year in prison for contempt of Congress. Their bosses then fired them and pledged to keep these pinkos out of the motion picture industry.” You’re not a “pinko” when you’ve signed up for the Red team.

Dirda cited Trumbo as having “moral authority” so overwhelming that it led to the end of the blacklist: “Over time, though, Trumbo’s moral authority, a growing sense of injustice and, not least, his financial usefulness to the industry finally led director Otto Preminger to identify him as the screenwriter for the blockbuster Exodus.”

“Gruffly irresistible” and “endearing” are also added to the syrupy swirl of adjectives:

Not only is Trumbo colorful and outrageous, he’s also gruffly irresistible: When brought in at the last minute to rework the prison-escape film “Papillon,” he declares, “I may not be the best screenwriter in Hollywood but I am incomparably the fastest.” Of course, he may well have been the best, too.

Still, Trumbo’s isn’t the only endearing personality in these pages. Cook’s amiable, shrewdly observant presence adds immeasurably to the biography, as he raises the questions we ourselves would ask, makes clear his own views, and quickly wins our confidence through his common sense and decency. Appropriately enough, then, Cook admires Trumbo “as an exemplar of a certain set of American virtues — toughness, independence, persistence.”

“Independence?” In fact, Trumbo used situational communist ethics. The review did not address that Trumbo told Cook in the 1970s that he joined the party in 1943, that some of his “very best friends” were Communists and that “I might as well have been a Communist 10 years earlier.” He also explained about joining the party: “I’ve never regretted it. As a matter of fact, it’s possible to say I would have regretted not having done it.”

As Glenn Garvin revealed in the April 2004 issue of Reason magazine, Trumbo forwarded to the FBI letters from erstwhile fans who opposed U.S. involvement in World War II (when America and Stalinist Russia were allied against Hitler), writing to the government: "I share with the men of your organization a sincere desire to see an end to all such seditious propaganda as criminal slander of the Commander in Chief, defeatism, pacifism, anti-Semitism and all similar deceits and stratagems designed to assist the German cause."

As Allan Ryskind's recent book Hollywood Traitors explained, Trumbo not only supported Stalin (and Hitler when he was a Stalin ally), but he also supported North Korean dictator Kim il-Sung after the Korean War. In an unpublished movie script, he had the heroine proclaim that North Korea’s invasion of the South was perfectly justifiable, for this is “Korea’s fight for independence, just as we had to fight for our own independence in 1776.”