Washington Post columnist Lonnae O’Neal wrote a column for the front of Monday’s Style section with the headline “A teen’s rant over Obama takes us to an ugly place.” Online, the headline was "Teen’s viral rant takes us deeper into 'The Twilight Zone.'"

Her target was conservative teen YouTube sensation C.J. Pearson, now heading up Teens for Ted (Cruz). His latest video (with more than 1.7 million views) attacked Obama for saying nothing to Kate Steinle’s family after she was killed, or the families of soldiers shot dead at a Chattanooga recruiting station. It’s “ugly” to point this out, apparently. She began:

I knew I had to watch the viral video of 13-year-old conservative (activist? speaker? baby-winger?) Coreco JaQuan Pearson. But I had to stop and start a few times to get through it.

The tone so mismatched the pleasant-looking kid it was coming from that I was nonplussed. It was like watching the 2007 video sensation “Chocolate Rain” again for the first time. It had the same kind of weird.

But with a lot more ick.

O’Neal wouldn’t even use Steinle’s name, or the name of her killer. She was “allegedly” killed by an illegal immigrant:

“I pull no punches,” Pearson responded in an e-mail inquiring about the strident tone of his recent video criticizing President Obama for inviting a 14-year-old Muslim student from Texas to the White House. The student, Ahmed Mohamed, was wrongly arrested after the clock he’d built was thought to be a bomb. Pearson also inveighs against Obama’s response to the killing of a San Francisco woman, allegedly by an undocumented immigrant, among several other criticisms.

“When cops are being gunned down, you don’t invite their family to the White House,” Pearson sneers. “You never did.”

But “when a Muslim kid builds a clock? Well, come on by. What is this world that you are living in?”

It’s a “Twilight Zone” of our own creation. It’s where attention equals achievement in the same way PowerPoint presentations can approximate scholarship. Pearson’s got a Web site. He’s branded. He’s on message. He’s got followers.

What’s the problem? Well, watching Pearson, you can’t help but be put off by anybody who is 13 and who is so disrespectful, especially without the standing and age to allow his words to pass for serious critique or discourse.

O’Neal fails to realize that it’s the teenager part that makes the video go viral. If a 28-year-old read this commentary on Obama, it would be thought of as utterly ordinary. But the same words in the mouth of a 13-year-old get more attention. It's easy to bet if the 13-year-old went viral on YouTube for saying Obama was the greatest president of the last century, she wouldn't find him unserious. He might be precociously brilliant.

If O’Neal hates “unserious discourse” on YouTube, how did she greet Glozell and the other youthful liberal YouTube stars President Obama invited in for an interview? She didn’t. In a front-page story on May 27, Post reporter Juliet Eilperin allowed Obama’s strategy had “risks,” but the weight of scrutiny and opprobrium was still on Obama’s critics:

There was Obama's Google-arranged interview with YouTube superstar GloZell Green, best known for her bright-green lipstick and effervescent delivery. In the interview, she described Michelle Obama as "your first wife" and made an off-color play on the word "dictatorship" in referring to Cuban President Raúl Castro.

The webcast also produced a stream of racist and offensive remarks aimed at both the president and the interviewer that will live on the Internet for eternity.

"I think we can have a more permissive framework of what it means to draw people into conversation online," said Goldman, the first-ever White House digital director. "The Internet can be little unpredictable, and the conversation will usually take a different form than it does, say, in the briefing room."

The real surprise of O’Neal’s column was turning to another black Republican, former Rep. J.C. Watts, to trash 13-year-old C.J., or anyone who supports his teenaged punditry. Why would he bust on the kid? Except he's backing Rand Paul for president: 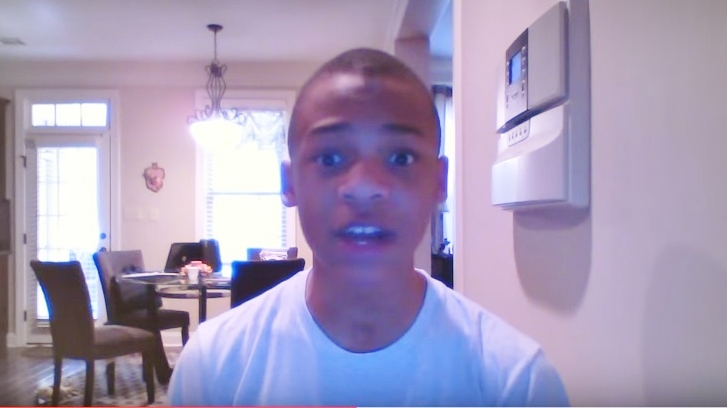 Former Oklahoma congressman J.C. Watts spent eight years in the House, including as conference chairman for the Republican Party. He doesn’t doubt the teen’s sincerity but says he’s concerned about the motives of some of the people rushing to support him.

Watts offers what he calls “some context on life”:

“Because you’re 21, you’re old enough to buy beer. That doesn’t make you a man.”

You wouldn’t want someone who just graduated from seminary pastoring your church, even if you see potential in that person, says Watts, an ordained minister.

When someone claims authority, preferably you’d want that person to be more seasoned, especially in politics, which for both parties can be harsh and exploitative, Watts says.

“It’s not that they can’t have opinions, that they can’t have political thoughts, but at 12 or 13 we want to make sure you’re a good student,” he says. “If you have interest in athletics, you need time to develop those skills. You’re going to have plenty of opportunity to be thrown under the bus when you’re 30 or 40. You don’t want to be thrown under the bus before you’re 15.”

Watts says he’d be concerned if his grandson was in such a situation.

Obviously, someone born in the current century isn’t anyone’s idea of a seasoned political thinker. But O’Neal is having trouble sitting through this video because a teenager – especially a black one – should not be calling Obama “ignorant” and “incompetent.” Those words are supposed to be saved for George W. Bush.