CORRECTION: My first version incorrectly reported the first part of this interview was on Tuesday night, not Tuesday morning. Inskeep notified me via Twitter that parts of the full interview I had protested about being absent from Tuesday night's story were the focus of the story on Tuesday morning. My apologies to Inskeep and the reader for missing it. It's revised below. --TG

NPR Morning Edition anchor Steve Inskeep was granted another interview with President Obama just before he left on another Martha’s Vineyard vacation, and the first story aired on Tuesday's Morning Edition (and a second half on Tuesday night’s All Things Considered.) The subject of these segments was the Iran deal. 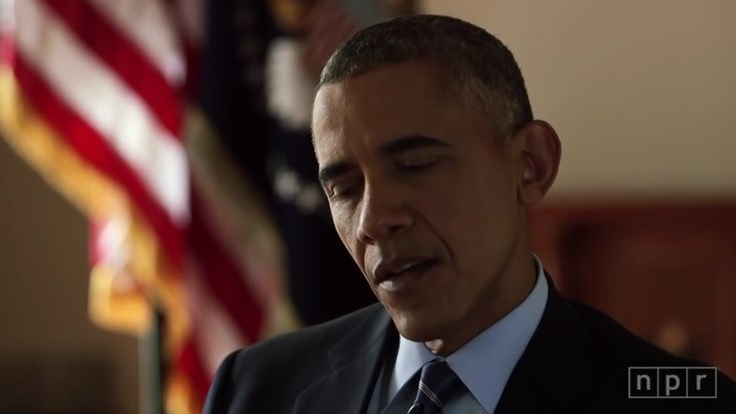 Despite the strange notion held by many liberals that NPR is a voice for civility in media and politics, Inskeep failed to ask the president about his controversial recent remarks in a speech at American University that “It’s those hardliners chanting ‘Death to America’ who have been most opposed to the deal. They're making common cause with the Republican Caucus.”

Perhaps Inskeep felt that CNN’s Fareed Zakaria asked about those remarks, and Obama only doubled down on them. So why ask again? (Inskeep told me that was "dead on.")

But NPR wasn’t suggesting that Obama had crossed a line, even as The Washington Post editorialized that this was a “low point” in Obama’s rhetoric.

In the Tuesday morning segment, Inskeep began by noting the view of critics:

STEVE INSKEEP: We spoke beneath portraits of Truman and Washington and Theodore Roosevelt. The president's tone was restrained but not his words. He's expressing no patience for opponents of the Iran nuclear deal.

BARACK OBAMA: This is the challenge that I've had over the last several weeks, Steve, as I've listened to the critics.

STEVE INSKEEP: He says their arguments are, quote, "illogical."

BARACK OBAMA: Or based on the wrong facts. And then you ask them, all right, what's your alternative? And there's a deafening silence.

Inskeep could have noted that just like on Obamacare, the president has resorted to claiming that Republicans never offer alternative solutions, or in this case, that they only favor war. That would be "based on the wrong facts."

Inskeep interviewed Obama before liberal Democrats like Sen. Charles Schumer and Rep. Eliot Engel come out in opposition to this deal, so he was unable to incorporate them into a question on Obama's rhetoric. Are they dishonest neocons making common cause with the "Death to America" folks too? Isn't Obama displaying an ideology as well?

STEVE INSKEEP: The president said his critics need to, quote, "pull out of the immediate politics" and consider, quote, "the right thing to do for the country." Republicans have led the opposition, though critics are not purely partisan. Shortly after our interview, two leading Democrats announced their opposition. Sen. Chuck Schumer and Congressman Eliot Engel are prominent supporters of Israel. Israeli leaders say the deal doesn't do enough to restrain Iran. In answer to such opponents, the president offers a stark choice. He's been saying if Congress kills the deal, it will risk war. In our conversation, we challenged the president to talk about something else. We asked what the world would look like if the deal is approved.

(INTERVIEW) STEVE INSKEEP: Secretary of State Kerry said to us the other day that this nuclear deal will leave the United States absolutely - his word - absolutely freer to push back against Iran and its ambitions in the region. If you get the deal, what do you intend to with that freedom?

BARACK OBAMA: Well, let's first focus on the fact that a central objective of not just my foreign policy but of U.S. foreign policy with Democratic or Republican administrations has been preventing Iran from getting a nuclear weapon. That would be a game changer.

STEVE INSKEEP: With that issue resolved, the president said, the U.S. can try to stop Iran from shipping weapons to Hezbollah. That militant group threatens Israel and supports the government of Syria's Bashar al-Assad. The president says the U.S. can also collaborate in new ways with Iran's neighbors to develop missile defense systems. That would reduce any future threat of an Iranian missile strike.

Inskeep softly tiptoed up to the Republican critique that ending sanctions gives Iran a free hand (to finance terrorists like Hezbollah, in effect): “As you know very well, Mr. President, your critics have argued that this deal, even whatever it does to the nuclear program, leaves Iran free to act in the region in ways the United States may well oppose. That's their argument.”

Obama shot back “there's no evidence, there's no logic to the notion that somehow we will let up on trying to prevent activities that Iran may engage in that would be contrary to our national security interests.”

INSKEEP: For those 15 years, he says, the world gains extra security. By then, Iran's government or its interests may change. Even if Iran never changes, the president says, weapons inspectors will remain at work permanently. The president says his critics are ignoring the idea that it's good to buy time.

OBAMA: And what that tells me is that there may be ideological opposition to doing any business with Iran.

INSKEEP: It would be more honest, the president contends, if his critics simply admit they don't favor any diplomacy with such a hostile nation.

OBAMA: If you want to just say, we don't think you should deal with Iran, then that at least has a logic to it. If you're saying, though, that this is an issue that can't be resolved diplomatically and you share my view that Iran can't get a nuclear weapon, then you really are narrowing your choices at that point.

INSKEEP: Congress votes next month on whether to reject the nuclear deal, and the president is framing this as a narrow choice indeed. Accept the negotiated agreement with all its complexities an risks, or take a risk on chaos and even war. Steve Inskeep, NPR News.

This kind of softball interview is a dramatic contrast to how NPR covered George W. Bush's War on Terror.

Earlier: Inskeep to Obama's campaign manager that Obama is like Lincoln, keeping harsh criticisms of his opponents locked away in a drawer.