The Washington Post was apparently too star-struck to notice the irony of Kevin Spacey coming to an Annapolis reception to demand millions of dollars more in tax credits from the Maryland state government for a Hollywood company to make the program “House of Cards”in the state.

Spacey, an avid liberal and Obama fan, seems to like corporate welfare when it benefits him. Post reporters Jenna Johnson and John Wagner never found an ounce of One Percent irony while they described the oozy Spacey scene at the Red Red Wine Bar: 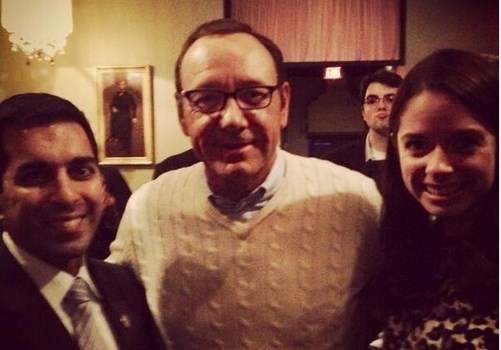 Lawmakers got about 90 minutes with him at an Annapolis wine bar on Friday night, during which they asked questions about the recently released Season 2, snapped selfies and — whether they admit it or not — pretended that their lives and careers were as glamorous, exciting and mysterious as Hollywood’s version of politics....

Inside the bar, Spacey oozed charm as he schmoozed and smiled. He wore a white cable-knit sweater, a preppy look more associated with the yachts parked down the street than the mess of public servants wearing off-the-hanger, department-store suits. It was a rare bipartisan event, with Democrats and Republicans equally giddy and star-struck. Snippets of conversations escaped from the bar to the hungry reporters outside.

Spacey’s Tinseltown paymasters have actually demanded more millions before they will film another season in Maryland, a threat that’s already spurred a 45-to-1 state Senate vote in favor of more subsidy money:

“House of Cards” filmed its first two seasons in Maryland and planned to start filming the third season this spring. That has been pushed off until at least June, as the show’s makers refuse to continue filming in Maryland until lawmakers vote to set aside millions more in film tax credits. The show has already received, or is in the process of receiving, as much as $26.6 million in reimbursements for the more than $119 million they spent in the state during the first two seasons. For Season 3, they want another $15 million. So far, the state has only promised $4 million....

The production company behind House of Cards — Media Rights Capital of Los Angeles — sent Gov. Martin O’Malley (D) a letter in late January that gently suggested that if lawmakers fail to deliver, they would “break down our stage, sets and offices and set up in another state.”

No one’s setting up the familiar liberal reaction to corporate welfare: Some homeless people in Maryland or some food kitchen is going to get slighted so that Kevin Spacey can get his salary paid for by the state of Maryland. They also avoided the Tax Foundation view that film tax credits do not really bring added revenue to a state.

The online headline for this story was a play on his acting role, “Kevin Spacey whips votes for Maryland film tax credits.” In the Sunday paper, the story was buried on page B-3 with no pictures and the less descriptive headline “Spacey channels alter ego in Maryland pitch.”