Touting itself as “social media with a mission,” Upworthy has “drawn big traffic – about 53 million visitors in February — with sharing-friendly content. And it does its news aggregation with a point of view that is decidedly progressive and left-wing.” 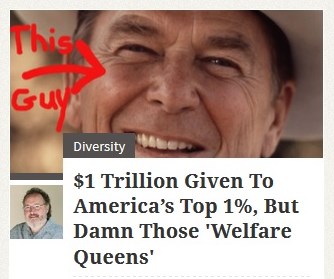 Some of the recent items under Upworthy’s politics section include “Watching The Arizona Bill Go Down In Flames Isn’t Just Cause For Celebration. It’s A Sign Of Change,” “5 Ways Your Life Is Going To Change Because Of Obamacare,” “3 Anti-Immigration Myths That Take Seconds To Debunk For An Actual Economist” and “A Senator Asks A Panel Of Experts To Defend Walmart. It Gets Awkward.”

“We do have a point of view,” the site says on its “about” page. “We’re pro-gay-marriage, and we’re anti-child-poverty. We think the media is horrible to women, we think climate change is real, and we think the government has a lot to learn from the Internet about efficiency, disruption, and effectiveness.”

Another one of their headlines (for the second Obama inaugural speech) was headlined  “Politics Aside, President Obama Just Beautifully Articulated What America Is.”

"Politics aside,"my foot. Some Republicans are getting really edgy about new social media:

“It has the potential to be more dangerous to the livelihood of the GOP at the presidential level than the entire editorial board of The New York Times,” said Republican strategist Ford O’Connell. “It has the potential to nudge progressive voters to the ballot box in national elections. This is one giant liberal activist social media machine.”

The content is chosen to strike a chord and go viral with the audience that Upworthy states on its site it’s aiming for: “Basically, ‘The Daily Show’ generation. People who care about what’s going on in the world but don’t want to be boring about it.”

An academic insisted to Gold that one viral video can change an election. (Although no one should discount the Old Media in push-push-pushing something to insure it goes as viral as possible). For example: Romney and the 47 Percent:

And as Paul Levinson, a professor of media and communications studies at Fordham University, pointed out, sometimes a single video can change the tone of an election.

“All it takes is one story when you get into an election cycle,” he said. “When you think about 2012 and the video of Romney lashing out at 47 percent of the people — it was Mother Jones, but any site that’s active and out there can indeed have a major impact.”

Full disclosure: Gold interviewed us on Upworthy, too. In our office, MRC social-media manager Scooter Schaefer has informed those of us who are  middle-aged Reagan Youth all about this new formula, and how conservatives are trying to see if they can't borrow some of these messaging methods.

For bloggers who want to be writers, too, it's frustrating. These people love posting a snotty sentence and a video. What will happen in a new world if younger voters don't watch as much TV news?

According to a recent study, 43 percent of 18 to 24 year-olds didn’t watch any live TV during the one week survey period, and 40 percent of 25 to 34 year-olds said the same, POLITICO reported last month

And that’s what some GOP messaging experts said scares them the most about Upworthy. The site seems to have a handle on the next generation of voters. It gets great traffic numbers. And it also curates simple, emotionally-driven content with a left-wing, progressive bent.

“It seems to us like the classic thing that Obama and Organizing for Action are trying to do, which is to take people who may seem pretty non-political and try to activate them,” Tim Graham of the conservative Media Research Center said. “You know, try to nudge them. These aren’t people who are going to read political books or blogs, they may just need a little bit of a push. They’re not looking to rehash the talking points you’re going to find on the floor of the House. They’re trying to do something different — it is the tech equivalent of saying, my brothers and sisters aren’t as political as me, so how do I reach them?”

Correction: I incorrectly listed Hadas Gold as the author, not Mackenzie Weinger.