NY Times Editorial Page Demands Not Only Clemency for Edward Snowden, But End to Any 'Vilification'

On Thursday, The New York Times clearly insisted on its own Person of the Year: it lauded "whistle-blower" Edward Snowden’s allegedly heroic mass-leaking against an allegedly criminal federal government, and demanded that Snowden not only receive clemency, but that “President Obama should tell his aides to begin finding a way to end Mr. Snowden’s vilification and give him an incentive to return home.”

Is it realistic for the Times to think the government should stop everyone from vilifying Snowden? Or are they only saying all good liberals should refrain from criticizing him? Times Public Editor Margaret Sullivan asked editorial-page boss Andrew Rosenthal if this would sway Obama:

“That’s anybody’s guess,” he said, noting that the pressure on the president is intense by all sides. He added, “We have been very disappointed with him on these issues.”

“Sometimes,” he added, “you have to go beyond what is realistic” in an editorial recommendation, not necessarily saying what might happen but rather, “this is what should happen.” [Emphasis theirs.]

Sullivan may be the in-house critic, but she was very supportive of the Snowden-the-hero thrust of the editorial:

Like The Times’s editorial board, I believe that Mr. Snowden has done the United States, and in fact, the world, a great service.

I agree wholeheartedly with this line in the editorial’s concluding paragraph: “When someone reveals that government officials have routinely and deliberately broken the law, that person should not face life in prison at the hands of the same government.” 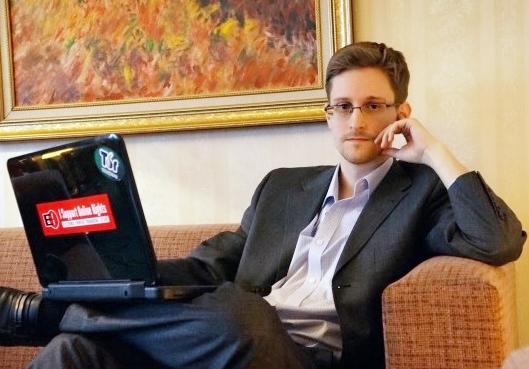 These people all seem to think their job is feeding Snowden's already enormous ego. He's somehow a greater moral exemplar than the Pope. The Times editorial seemed to insist on Edward Snowden deserving a better life than his current exile in Moscow:

Considering the enormous value of the information he has revealed [stolen], and the abuses he has exposed, Mr. Snowden deserves better than a life of permanent exile, fear and flight. He may have committed a crime to do so, but he has done his country a great service. It is time for the United States to offer Mr. Snowden a plea bargain or some form of clemency that would allow him to return home...

The shrill brigade of his critics say Mr. Snowden has done profound damage to intelligence operations of the United States, but none has presented the slightest proof that his disclosures really hurt the nation’s security.

The Times is pushing around Obama because they feel he hasn't been as ultraliberal on terrorism as they wanted him to be. They wanted more of an ACLU type that would shred any national-security program that grew stronger after 9-11. They wanted much of what  Bush implemented to be abolished. Writ large, the media hasn't attacked Obama from the ACLU direction like they did to Bush -- in part, because Obama is someone they can work with.

If Snowden had done this during the Bush years, the Times would have been much harsher on this leaking being a major embarrassment for Bush, and then it would have suggested the "violations of law" they're asserting right now would be grounds for impeachment. Since they believe Obama might just give in to the Times agenda, they won't say anything like that at all.

In the Bush years, the Times was in a "shrill brigade of critics" that never proved that the leaking of Valerie Plame Wilson's name ever damaged national security or our intelligence agencies. That was merely assumed.