Barbara Walters, Shameless Hypocrite: Hits Kennedy Mistress for Greed, Tells Her She Should Have Stayed Quiet

Almost four years ago, ABC’s Barbara Walters came out with her memoir Audition, using as its selling point a tale of her tawdry 1970s affair with married black Sen. Edward Brooke (R-Mass.). Seldom has a TV personality been a more shameless public hypocrite than Walters was on Friday with former Kennedy mistress Mimi Alford during an interview on “The View.”

Walters battered Alford four times with the notion she was greedy, with four different outbursts like “She’ll make a lot of money!” (That one came in the introduction.) Walters asked Alford why she would hurt Caroline Kennedy and her family, and then assaulted her with the reverse idea, that she could have “saved” Monica Lewinsky from ridicule if she’d talked earlier. But mostly, she insisted the book "did not have to be written" and "You could have let it go!" [See video below. MP3 audio here.]

It's always a bit amazing for a journalist, who's supposed to want to reveal secrets, to tell people they should shut up and not tell their story. It's more amazing to tell someone not to write a tell-all memoir after you've already done so, with a ka-ching. Walters was probably signaling to Alford: "I'm famous, people want to know about my fascinating life. You're a nobody, just trying to exploit a famous man's aura for a few bucks."

Walters began by whacking Alford for greed before she had a chance to speak:

There have been plenty of scandalous stories surrounding John F. Kennedy's personal life over the years. Goodbye, Camelot. But nothing quite as shocking as a new memoir from a 69-year-old woman who claims that 50 years ago, President Kennedy took her virginity. She was 19, she remembers every detail. She says he offered her drugs, he made her do oral sex, and also satisfy his best friend. It’s quite a story, it’s called Once Upon a Secret. She’ll make a lot of money! You will, Mimi Alford, and thank you for coming today.

These are the opening volleys from Walters: "He took you in his wife's bed -- did you feel any guilt?" And: "Did you think he was so attractive that as a 19-year-old college student, you just fell into the bed and you knew it was his wife's bed?" Then she went back to whacking the greed: 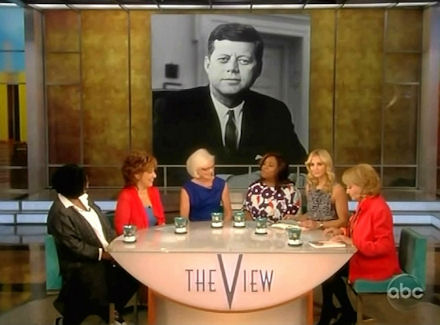 WALTERS: You talk about him making you do oral sex with his friends. With one of his friends. He wanted you to do it with his younger brother [Ted]. I mean, these were very lurid details that you describe in this book.

ALFORD: It was very difficult –

WALTERS: It’s going to sell a lot of books.

This repeated talking point may please Alford's publisher, but Walters wasn't stating it as a positive.

Perhaps Walters thought she was more discreet, like her words about her affair with Brooke on page 259: "I missed him terribly at first. he had been so much a part of my life and my fantasies."

But then, in discussing her affair with married caterer Claude Phillippe on page 99, she wrote: "Phillippe, older and more experienced than the men I had known, was a great lover, tender and passionate. I grew up sexually."  But she didn't write that to sell a lot of books, apparently, unlike her guest: 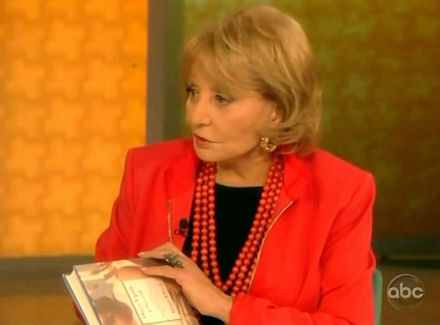 WALTERS: Ms. Alford, I have to bring something up. Because as I said, you’re going to sell a lot of books. There’s a lot of juicy details and after 50 years you remember all of them. But there are two things that trouble me. One, did you think at all of Caroline Kennedy, who’s alive today, and her children when you wrote this book, which did not have to be written?

And also did the name Monica Lewinsky mean anything to you? Do you thInk maybe you might have written this book or talked about it then, it might have saved her when she was just being pilloried?

ALFORD: Well, if I can answer the second question first, let me say monica lewinsky, that's her story, when that relationship was revealed, I was still in a place of hiding myself. In fact, that what I worried about at that time that somebody was going to find me. So there was no way that I would have written a story then.

ALFORD: And Caroline --  there was no motivation or intention in my book to hurt anyone. This is my story.

WALTERS: I know, but it must hurt that family.

Walters then asked "What does your family think?" Alford said "My family is 100 percent supportive behind me." The others had their turns, but it always came back to Walters and her disapproval:

SHERRI SHEPHERD: What do you want people to come away from this feeling about the president? You know, these are very lurid details that we're hearing about?

JOY BEHAR: That he was a pimp. That's why the book is a little different from the kennedys. You know what I mean. We have heard that the kennedy family, they were a bunch of hound dogs but this is different.

ALFORD: No, Whoopi, for 40 years I kept the secret. I hadn't talked about it.

GOLDBERG: Yeah, but why now?

ALFORD: Because in 2003 when I was mentioned in somebody else's biography of the president, there was a paragraph about me.

WALTERS: I read that book. There was one paragraph! Very mild. Did not go through these details. No one even remembers it. You could have let it go!

Alford said she the point of her book was that she kept that secret, and it led to her withdrawing from her problems throughout her life. “If there's anything – If my book opens just a tiny conversation or discussion for other people who have had secrets, had that kind of thing in their life, then it's a good thing.”

But, you know, we were asking you a lot of questions. And I've seen other interviews you've done. And you have behaved with dignity, and I give you that. I do, Mimi Alford, and I know you're going to sell a lot of books! And maybe that will help compensate for any bad memories.

Barbara Walters was handing out the bad memories, not taking them away.