In the wee hours of Election Night came this Twitter burst from Arianna Huffington, the one who loaded buses to rally with Jon Stewart for "sanity" and calm and taking the rhetoric down a notch:

What? Dowd didn't say that, as the tweet might suggest. Arianna didn't say it on ABC, either, just on Twitter. To put that in context, Rubio did have a multi-flag backdrop for his victory speech, but that's hardly unusual for politicians.

Now here is Rubio on Election Night, in hardly a Hugo Chavez frame: 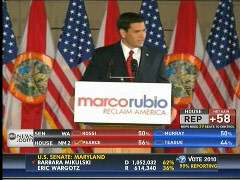 Huffington appeared on ABC with Nightline anchor Terry Moran and pollster Matthew Dowd in the 3 am hour. Neither of them commented on Rubio's backdrop. A few minutes after they talked, ABC ran video of Rubio, as the Senator-elect joked about his journey: "When you're 35 points down in the polls, and the only people who think you can win live in your house, and four of them are under the age of ten, you better know why you're running." Huffington spoke again to Moran briefly after the speeches, and heard conservative blogger Matt Lewis tout Rubio as a "rising star," but she skipped the "dictator" jab on the air. Here's the image of the tweet: