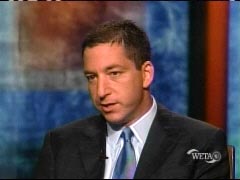 What happens when the Left likes Stephen Colbert more than Jon Stewart? In a Tuesday interview on taxpayer-funded Pacifica Radio program Democracy Now, radical lefty Glenn Greenwald of Salon.com loved Colbert's "March to Keep Fear Alive," but did not like the centrist-against-extremists pose of Jon Stewart's "Rally to Restore Sanity," since all the extremism is on the Right, and there's only tiny fringes of that on the Left. First, Colbert:

Well, that, I think, is actually something that I found incredibly encouraging, because the rally there is “to keep fear alive.” And, of course, the American right is dependent, more than anything else, on fear. And as we talked about earlier, Democrats use fear, as well, to motive their base. And so, the role that fear plays in our political culture and the way in which politicians exploit that, I think, is one of the most central issues. And to the extent this rally is designed to mock that, I think that’s a good thing.

It turns out that Colbert's fake-conservative bashing of "Fear" is a more authentic liberal pose than Stewart's phony centrism, but Greenwald resents Stewart's "Million Moderates March" pose precisely because of his "very influential voice" in the media and on the Left:

The problem that I had with how it was structured and what it is that he’s saying—and he’s far more than a comedian. I mean, he’s a very influential voice among progressives and in the media narratives —is that, for one thing, I don’t think the problem with our politics is tone. I think the problem is content. There are all kinds of people who advocate extremely heinous ideas, but do so in a very soft-spoken and civil manner. Bill Kristol comes to mind, John Yoo, as well. These are people who can go on and be extremely polite in conversation and have done that on his show. So I think the problem, in terms of extremism, is not about tone, but about content, and to talk about tone, I think, distracts from the issue.

I also think that we don’t really have a problem with excess activism in the United States, as he seems to suggest—we need to stand up for the virtuous people who don’t go to rallies. I think going to rallies and being politically engaged and even passionate is actually a virtue and something that ought to be encouraged.

But the real problem I had with it is that, in order to appear as though he was being more evenhanded, he didn’t depict the extremism as being a problem on the right, which is the reality. These extremist ideas are really quite pervasive on the right. And so, what he did was he tried to create an equivalency by saying, well, it’s—the problem is on the left, as well.

And he picked out 9/11 Truthers and a CodePink rally and suggested that people who call Bush a war criminal are every bit as inflammatory and extremist and to be condemned as, say, people who say the President was not born in the United States. And that’s an extraordinary false equivalency, because these extremist ideas are pervasive on the right. People who go to CodePink rallies are a tiny minority, for better or for worse, among Democrats. But more so, the fact that Bush is a war criminal happens to be true, and there’s ample evidence for it, including, as I cited, the report by the four-star general, Antonio Taguba, who is in charge of investigating detainee abuse, who concluded that George Bush and top administration officials committed war crimes. And so, I think what he was trying to do was to show how fair-minded he was by condemning both the left and the right. This is a common disease in our media, even though left and right are not equal.

Democracy Now host Amy Goodman had asked Greenwald to summarize his thoughts from a Salon.com article on "The Perils of False Equivalencies and Self-Proclaimed Centrism."

In that article, Greenwald is plainer that "Stewart's examples of right-wing rhetorical excesses (Obama is a socialist who wasn't born in the U.S. and hates America) are pervasive in the GOP, while his examples of left-wing excesses (Code Pink and 9/11 Truthers) have no currency (for better or worse) in the Democratic Party."

However, according to a 2007 poll by Rasmussen, 35 percent of Democrats believed that President Bush knew about the terrorist attacks of September 11, 2001 in advance.
Pacifica Radio Stephen Colbert Glenn Greenwald