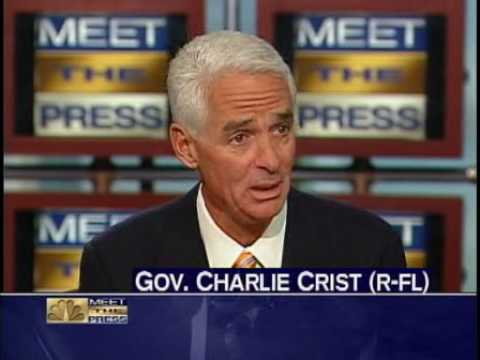 Last year, Time offered its "Ten Questions" feature to Louisiana Gov. Bobby Jindal, but the reader questions it selected were mostly hostile, panning his response to the State of the Union, asking if he looked like the geeky Kenneth the Page from "30 Rock," and underlining the shakiness of the GOP: "Voters rejected the GOP in November. What changes do you think it needs to make in order to become relevant again?"

This week, Time offered the same feature to Florida Gov. Charlie Crist, and the questions were not hostile, except for "Why don't you support same-sex marriage?" and maybe "Do you still consider your support for the stimulus to have been the right choice?" There were neutral oil-spill questions, and then there were these:

"How difficult was it to leave the Republican Party?" --  David Hutchinson, Kansas City, Kans.

"What are the pros and cons of running as an independent?" -- Kevin Waters, Harrisburg, Pa.

"I am a liberal Republican. Is there room in the party for me?" -- Jeffrey Hersh, Columbus, Ohio

"Does the space program need to be saved?" -- Jenn Johnson, Titusville, Fla.

The last time they offered these Ten Questions to a Republican was to Karl Rove, and there again, Time found the questioner to ask "Is being the 'party of no' working for the Republicans?"
Time Charlie Crist