Newsweek's Pushy Poll: People Oppose ObamaCare, Until We Badger Them to Support Its Laudable 'Details' 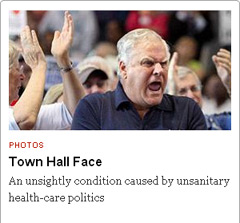 On Monday, Newsweek’s website featured a strange headline. "Poll: Most Favor Health Care." It would be interesting to find out who opposes health care. (It's like a headline that says "Most Favor Food.") The headline wasn’t just strange, it was misleading: it suggested the Democrats’ proposals were favored by most. That’s not what they found.

Newsweek took an Obama-defending poll. Here was the headline once you clicked on the link: "The Polling Contradiction: In the latest NEWSWEEK Poll, the majority of Americans are opposed to President Obama's health-care reform plan -- until they learn the details."

That’s called a "push poll." It’s just like Newsweek calling up people and insisting they should really support ObamaCare, because it embraces abstract liberal principles like requiring insurance companies to insure everyone. After they pushed, Newsweek touted how they yanked voters into Obama’s column:

When asked about Obama's plan (without being given any details about what the legislation includes), 49 percent opposed it and 40 percent were in favor. But after hearing key features of the legislation described, 48 percent supported the plan and 43 percent remained opposed.

Here’s a stark number that wasn’t written up (from the PDF): independents overwhelmingly oppose ObamaCare: 26 percent in favor, 62 percent opposed. They improved it to 34-57 by supportively reading the "details." So much for "We Are All Socialists Now."