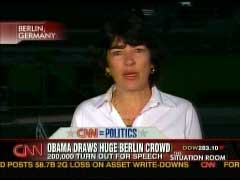 CBS 60 Minutes correspondent Lesley Stahl interviewed her occasional colleague (and CNN correspondent) Christiane Amanpour for the website The Women on the Web, and the oddest part came when Amanpour insisted "nobody knows my biases...I just try very hard to report the facts and to tell the stories as best as I can." In fact, Amanpour’s biased liberal journalism has landed her in our year-end Best of Notable Quotables issue four times. These professions of impartiality came as Stahl asked whether her Iranian background affected her reporting:

STAHL: That brings me back to Iran, because I wonder – this is always asked of me as a reporter – what are your biases? What are your opinions? How hard is it for you to cover anything in Iran, given your own family background?

AMANPOUR: I understand people asking that question, but I always reject it. I really … I ask people just to look at my body of work. And nobody knows my biases. Do they think I’m against? Do they think I’m for? They don’t know my biases. They don’t know where I come from in this. I just try very hard to report the facts and to tell the stories as best as I can. I am not part of the current crop of opinion journalists or commentary journalists or feelings journalists. I strongly believe that I have to remain in the realm of fact, and from there delve deeper into a society.

Here are the four year-end quotes displaying how her biases can be easily located:

2008: "The black people in France are very proud and very hopeful for their future. They also live, many of them, in poor situations. And you know, you’ve had your own riots here and protests and disturbances in the Banlieue — in the city. At one point, when we were covering those riots, when you were Interior Minister, you called the rioters ‘scum.’ And I’m wondering whether you feel, today, when you stand next to someone you clearly admire so much, and who has broken so many barriers, that you regret that term or that you wish you hadn’t said it?" — Amanpour to French President Nicolas Sarkozy during a July 25, 2008 conference with Barack Obama shown live on CNN.

2003: "I think the press was muzzled, and I think the press self-muzzled. I’m sorry to say, but certainly television and, perhaps, to a certain extent, my station was intimidated by the administration and its foot soldiers at Fox News. And it did, in fact, put a climate of fear and self-censorship, in my view, in terms of the kind of broadcast work we did....The entire body politic...did not ask enough questions, for instance, about weapons of mass destruction. I mean, it looks like this was disinformation at the highest levels."– Amanpour on CNBC’s Topic A with Tina Brown, September 10, 2003.

2000: "Like these young dancers, Carlos [Acosta] benefited from Cuba’s communist system because it not only recognizes physical talent, it nurtures it, whether it’s baseball, boxing, or ballet." -- CBS 60 Minutes correspondent Christiane Amanpour on a star of London’s Royal Ballet, May 21, 2000.

1999: "A lot of the women that I meet from traveling overseas are very impressed by you and admire your dignity. A lot of the people you meet are people who suffered, people you saw today, and who believe that they identify with you because they have seen you suffer. And in a speech in Africa last year, you spoke about living for hope and reconciliation, living for forgiveness and reconstruction, and living for a new life – have you been able to apply that to your own circumstances? Have you been able to forgive your husband?" -- CNN’s Christiane Amanpour to Hillary Clinton in Macedonia after a tour of refugee camps, May 14, 1999.

In the Stahl interview, posted on June 23, Amanpour very quickly turned to the idea that Americans have almost nothing but aged cliches and stereotypes about Iran (like, say, their role as a leading state sponsor of terrorism?):

And I will say one thing very clearly: The lack of information about Iran, in the United States especially but also in the rest of the world, in a way makes my job … it’s sort of like an open well to plumb because anything I say, you know at least increases people’s awareness of what’s going on. And I think the one thing that I have really tried to do over the last now 19 years of covering Iran as a reporter, is try to go beyond the inevitable cliché and the stereotype, which is found strongest in the United States, because the U.S. bases its relationship and its knowledge about Iran on 30 years ago, and has very little impartial reporting to go on. And that’s what I try. But you look right now, if you just look at the television screens right now, all the so-called experts on Iran, 99 percent, are exiles based in the United States, have their own experience, their own history and their own agenda. And so that makes it very difficult for anybody to get a really clear view of what’s going on. That’s what I believe.

Only Amanpour is agenda-less. Then Stahl laments how objectivity isn’t valued any more, as if she practiced so hard at it:

STAHL: Well, let me ask you then about the state… of where objective journalism is heading.

STAHL: I come out of the same background that you do. I always – I guess the right word is to say, sat on my own opinions because we do have our opinions, you can’t deny that. But I tried as hard as I could to overcome them and to be as impartial a reporter as possible. But I find as I look out on television, and even in my reading, that there’s less and less a market for that kind of reporting. The future seems to be with people who slant their stories. Even my own child, whom I put in that younger generation, says she hates reporting that doesn’t tell her where the correspondent is coming from. And I think she’s representative.

AMANPOUR: She may be, and she’s obviously reacting to something that’s growing like wildflower now in our business. But the thing is, I get afraid when I read something and I just don’t know – is that the fact, is that the truth, is that somebody’s political bias, or somebody’s cultural bias? And that frightens me.

Of course there’s a major role for opinion commentary and there has been since time immemorial. But I strongly think that unless we are able to present people with the objective facts of what’s going on, how are they meant to know what is going on? For instance, right now in Iran I’m telling you with confidence that nobody knows what’s going on there, really, because when you’re just getting Twitter, Facebook, YouTube, amateur videos – and no explanation, no reporting – you just don’t know what’s going on. It’s speculation, it’s guesswork, it’s patchwork.

She quickly realizes that this could be read as dismissive of the brave Internet dispatches that are leaking out, so she praises those, but repeats that every democracy needs that brave band of expert journalists to bring truth to power.