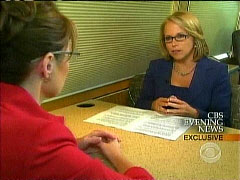 Governor Sarah Palin made a book deal with Harper Collins, and AP book writer Hillel Italie began like he was describing a shark attack: "You knew it was coming." Italie concluded his story with Palin's snarky critics insisting she doesn't have the brains to write a book:

Palin has never written a book and her critics, noting her disjointed CBS interviews with Katie Couric, have questioned whether she could. Two years ago, Palin told PBS' Charlie Rose that her favorite writers were C.S. Lewis ("very, very deep") and a Runner's World columnist, Dr. George Sheehan.

Even as he questions Palin's gravitas, Italie needs to issue a correction here: the interview in question is found on the Charlie Rose website -- dated Saturday, September 6, 2008. In this brief "Green Room" interview, which are online exclusives, Rose is absent from the interview, as is any interviewer. The actual question asked by the Rose staff is edited out. It only says on screen "favorite authors."

Italie could be relying on his unnamed "critics" -- liberal columnists who made the same error back in 2008. Here’s former Newsweek and U.S. News reporter Timothy Noah trashing Palin's Couric interview on Slate on October 1, 2008:

Why couldn't she name a single newspaper or magazine that she read on a regular basis before being tapped for the national ticket? Why couldn't she name a single Supreme Court decision she disagreed with apart from Roe v. Wade?* In an earlier (2007) interview with Charlie Rose on PBS, why did Palin, after mentioning C.S. Lewis ("very, very deep") as a favorite author, go on to cite George Sheehan, a onetime columnist for Runner's World? You can shrug off any one of these questions as unfair, but together they merge into one rude but necessary query: What does Palin know (besides, that is, how to play basketball and the flute)?

But Italie, as he looks down on Palin’s mental prowess, didn’t discover (and neither did Noah or his editors at Slate) that Noah’s linking to a September 2008 interview and calling it a 2007 interview. Palin was interviewed once on the Rose show on PBS (along with Gov. Janet Napolitano) on October 12, 2007. Favorite authors were not discussed.

Ruth Marcus of The Washington Post made the same error on September 30, 2008:

This would be more reassuring if Palin had demonstrated more evidence of having read extensively about history or world affairs. Asked in an interview for PBS's Charlie Rose show last year about her favorite authors, Palin cited C.S. Lewis -- "very, very deep" -- and Dr. George Sheehan, a now-deceased writer for Runner's World magazine whose columns Palin still keeps on hand.

All these liberals seem to think calling Lewis "very deep" is an indictment of Palin, as if she was only reading Lewis's Narnia novels. They seem unaware that Lewis also wrote on Christian theology, which could be what Palin is talking about. They also might be guilty of implying George Sheehan was a columnist, not an author, when he wrote seven books on running as well as his battle with cancer.

Italie did take time to underscore how Barack Obama, that great stylist and storyteller, has set the literary bar for presidential aspirants:

A memoir (or two) have become a virtual requirement for White House seekers, especially after Obama's "The Audacity of Hope" and "Dreams From My Father" established him as a stylist and storyteller with a vast following.

Palin hopes the memoir will correct media-created misunderstandings about her family, but Italie also emphasized Palin's apparent talent for dividing the Republican Party:

Palin declined to name any specific misunderstandings and avoided detailed comments about her family, her political aspirations or about the divide in the Republican Party between moderates and conservatives, a divide her vice presidential run helped widen.

And I suppose Italie believes the media played no role in trying to drive wedges into the Republican Party, constantly trying to spook the "moderate" Republicans into disavowing her.