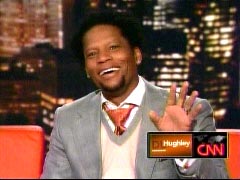 As Limbaugh-bashing networks like CNN and MSNBC continue to play up a Rush vs. Michael Steele feud, the diversionary tactic isn’t just keeping people away from focusing on Barack Obama. It also prevents a focus on CNN host D.L. Hughley’s inflammatory statement that the GOP convention "looked like Nazi Germany," and the man who put Hughley on the air – CNN president Jonathan Klein.

Klein is the man who killed Crossfire after 22 years in 2005 because he agreed with liberal comedian Jon Stewart that this harsh partisan head-butting was "hurting" America. Four years later, wild talk about Nazi conservatives is okay with CNN’s boss: he told the AP last fall that Hughley was given the instructions "Anything goes!"

On October 16, 2008, the Atlanta Journal-Constitution reported that Klein hired Hughley because he was "well-informed," deeply knowledgeable about the world (does that fit equating an American political convention to Nazi Germany?) Harsh partisanship would be encouraged, but this time without a troublesome conservative in the cast:

CNN/U.S. President Jon Klein said Hughley caught his eye when he saw him do Glenn Beck's CNN Headline News show a year ago. "He defied easy labeling. Yet he is very well-informed and his opinions are based on deep knowledge of the news and the world."

Hughley said he knows half the country will be ecstatic Nov. 5, half devastated. He'd love to get President Bush as a guest, especially if Barack Obama wins. "I'd love to say to him, 'You've been a horrible president. Your legacy is you were so bad, people said, 'We're going to try the black guy next!' "

That hardly defies "easy labeling." An Associated Press article by David Bauder a day earlier made it even clearer that Klein, the supposed scold of slash-and-burn partisan politics, was giving Hughley a free pass to slime conservatives:

Jon Klein, CNN U.S. president, said he took note of Hughley when the comic made an appearance on Glenn Beck's CNN Headline News show last year. Hughley, one of the four "Original Kings of Comedy," had a four-year run as the star of his own ABC sitcom and his own late-night show for Comedy Central.

Hughley was shopping his prospective one-hour show to two other networks when Klein called his agent to express interest.

"My agent called to say, `What do you think about CNN?' and I said I'm not a newscaster," Hughley said.

But the more he thought about it, the more it seemed to make sense.

Comedy on news networks -- planned comedy, that is -- is unusual but not unprecedented. Fox News Channel aired the "Half Hour News Hour," but production stopped in 2007. CNN International, seen outside of the United States, airs reruns of Comedy Central's "The Daily Show."

"The audience that gets so much of its news from comedians these days clearly has no problem with that," Klein said.

Klein said CNN drew a record high audience for cable television among the youthful 18-to-49-year-old audience during the second presidential debate, so the network wants to keep those young viewers engaged. News viewership tends to skew old, an audience less valuable to advertisers.

As for setting limits on Hughley, Klein said, "Anything goes."

"It's as if we're shutting off the lights at the end of the day and letting him run amok," he said.

TV veteran Mitch Semel is the executive producer. Semel was the first head of programming at Comedy Central, started "Politically Incorrect" with Bill Maher and was a CBS late-night programming executive.

Hughley already has a road trip planned, to interview participants at a Sarah Palin rally in North Carolina.

"It's a black guy and a Jewish producer, so we will stand out like `Mississippi Burning,'" he said.

There it is, right there in the AP story: Hughley mocking Sarah Palin and her supporters by comparing them to the Ku Klux Klan. Mississippi Burning was loosely based on the killing of black and Jewish civil rights activists by the KKK in Mississippi in 1964. Jon Klein was giving Hughley free rein to smear conservatives as bigots even in the first blasts of publicity for the show.

This hardly matches a story in the New York Times on January 6, 2005, where Klein, the sultan of civility, announced that he could not abide the harsh and confrontational style of Tucker Carlson:

Mr. Klein said, "We just determined there was not a role here in the way Tucker wanted his career to go. He wanted to host a prime-time show in which he would put on live guests and have spirited debate. That's not the kind of show CNN is going to be doing."

Instead, Mr. Klein said, CNN wants to do "roll-up-your-sleeves storytelling," and he said that was not a role he saw for Mr. Carlson. "There are outlets for the kind of show Tucker wants to do and CNN isn't going to be one of them," he said.

Mr. Klein said he wanted to move CNN away from what he called "head-butting debate shows," which have become the staple of much of all-news television in the prime-time hours, especially at the top-rated Fox News Channel.

Mr. Klein specifically cited the criticism that the comedian Jon Stewart leveled at "Crossfire" when he was a guest on the program during the presidential campaign. Mr. Stewart said that ranting partisan political shows on cable were "hurting America."

Mr. Klein said last night, "I agree wholeheartedly with Jon Stewart's overall premise." He said he believed that especially after the terror attacks on 9/11, viewers are interested in information, not opinion.

Focusing on Michael Steele’s mistaken decision to label Limbaugh as "incendiary" – a decision forgiven by Limbaugh – is taking the controversy away from CNN, D. L. Hughley, and Jon Klein, where it so richly belongs. Klein's views on harsh partisan head-butting is clearly evolving with the Age of Obama.