Politico vs. Brent Bozell: Do They Read Their Own Articles? 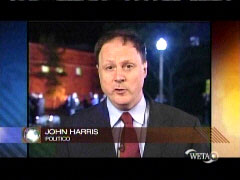 I don't think they have the story quite right, nor does its author, John Harris, who emails:

The calls are certainly a fascinating Washington ritual, but by no means do I think George Stephanopoulos is participating in strategy sessions.

Did John Harris read his own story? Here’s what he wrote in the original article about George and Rahm and James and Paul, hatching the Democratic public-relations line of the day (which is somehow not strategy-making):

Everyone likes to deride the "conventional wisdom." In fairness, though, the wisdom is not yet conventional at the moment it is hatched. And in any given news cycle, it is quite likely that Washington’s prevailing political and media interpretation — at least on the Democratic side — is being hatched on these calls.

Don't these competing claims make Harris look like he's back-tracking as fast as he can? The original newsworthiness of this article was to show how these men -- all Republican-whacking veterans of the 1992 Bill Clinton campaign -- are tremendously relevant again now that Emanuel's at Obama's right hand. But once conservatives reiterate that Stephanopoulos is too close to Democratic power to be trusted by the audience, Harris is lamely claiming:

To my mind, he established his journalistic bona fides more than a decade ago, even as the Clinton administration was still underway, when he showed his willingness to report aggressively on Democrats as well as Republicans.

"George speaks to Rahm, but he speaks to plenty of conservatives and Republicans every single day -- that’s part of his job. The idea that there is some daily conference call that he hops on is just nonsense and not true," said Schneider, who added that he didn't think the Politico piece implied otherwise.

This is an apples-and-oranges defense. Let's stipulate that George talks to Republicans (even conservatives) every workday. That is not the same thing as having what Emanuel told Harris was a "17-year-long conference call." If he was talking to certain Republicans on every workday, that would be more comparable -- except they would not have worked in the partisan trenches together.

Politico seems to be asserting today that no one should really take seriously their original articles, once they're presumed to be problematic for the liberal media. Why did Harris write this warm story with no question as to whether these calls compromise George's journalistic independence -- if he's ever had any? Clearly, the original story suggests George is simply a cog in the Democrat message machine:

Emanuel is the most likely to be talking policy, usually some program Democrats can use to score points in the daily partisan brawl with Republicans.

Stephanopoulos’ role is as the analyst and the skeptic. "George is really a big-systems thinker," Begala said. "As a journalist, he is half of a political scientist, and because he’s not in the partisan battles anymore, he sees things differently."

It is a sensitive point for Stephanopoulos, who shot to fame as a Bill Clinton retainer and has worked hard to fashion a reputation as an independent journalist.

He said he does not surrender that role when he gets on the calls, nor does he surrender personal feelings that go back nearly 20 years.

"We are all good friends," he said. "We just like talking to each other, and I learn a lot from it ... and that’s why we have been doing it for so long."

Still, the line between journalism and politics is not always bright. Begala said he often can’t remember the originator of any particular insight: "We talk so much — was this my idea that James changed, or was this George’s observation that Rahm tweaked?"