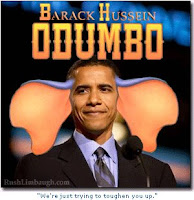 ere's the latest from the Thou Shalt Not Mock Barack Department: Brian Maloney at Radio Equalizer reports that the media is going after Rush Limbaugh again now that he’s on vacation. Chip Saltsman, a former Huckabee strategist seeking to win the race for chairman of the Republican National Committee, is being condemned for sending to GOP leaders a CD with the "Barack the Magic Negro" parody, an old mockery of Al Sharpton’s anger at Obama’s popularity:

Here, the distribution of a Limbaugh parody song recorded by Paul Shanklin in 2007 has landed a little-known, dark-horse GOP chairmanship candidate in "hot water", at least as the left would have us believe.But we've been down this road before: when the spoof was created in May of last year, even Obama himself brushed it off. Suddenly, however, now that it can provide political ammo, it has been resurrected.

When the Clinton-funded and appointed media watchdogs cried foul over this song in May of 2007, NBC's attack on Rush for racism won our year-end "Drive-By Media Award for Shooting at the Competition."

The "magic negro" term was put in political play by black film critic David Ehrenstein in the Los Angeles Times on March 19, 2007, who said sociologists used the term to deride the white "desire for a noble, healing Negro," often found in the movies as a mysterious figure to help out the white star of the film. Ehrenstein suggested Obama was the beneficiary of whites looking for their noble hero of a different color:

Obama's fame right now has little to do with his political record or what he's written in his two (count 'em) books, or even what he's actually said in those stem-winders. It's the way he's said it that counts the most. It's his manner, which, as presidential hopeful Sen. Joe Biden ham-fistedly reminded us, is "articulate." His tone is always genial, his voice warm and unthreatening, and he hasn't called his opponents names (despite being baited by the media).

Like a comic-book superhero, Obama is there to help, out of the sheer goodness of a heart we need not know or understand. For as with all Magic Negroes, the less real he seems, the more desirable he becomes. If he were real, white America couldn't project all its fantasies of curative black benevolence on him.

Maloney complained that a Fox News online report highlighting official condemnation from top Republicans showed "the Republican Party is more interested in launching into an apology tour rather than explain why the parody was created for Limbaugh's show in 2007. Their reaction underscores the toothless nature of today's GOP."

He also notes that former Ohio attorney general Ken Blackwell, one of two black contenders for the RNC chairman post, told Politico that some were being too sensitive to notions of political correctness:

"Unfortunately, there is hypersensitivity in the press regarding matters of race. This is in large measure due to President-Elect Obama being the first African-American elected president," said Blackwell, who would be the first black RNC chairman, in a statement forwarded to Politico by an aide. "I don't think any of the concerns that have been expressed in the media about any of the other candidates for RNC chairman should disqualify them. When looked at in the proper context, these concerns are minimal. All of my competitors for this leadership post are fine people."