Wolf Blitzer: It's Unfair Clinton's the Only Ex-President Pressed to Disclose Donors 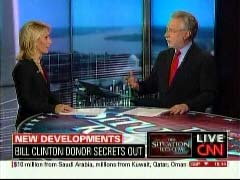 On Thursday’s edition of The Situation Room, CNN anchor Wolf Blitzer suggested it was unfair for the Obama transition team or Congress to press Bill Clinton to release the names of donors to his foundation and presidential library. The media never succeeded in pressing the Clintons to release the information when Hillary was running for president, in part because there wasn’t much public evidence of pressing.

Blitzer told reporter Dana Bash: "But the other living former presidents, as far as I know, Jimmy Carter and George Herbert Walker Bush, they haven't released the names of their -- their contributors to their libraries and their other foundations or whatever...I wonder if they're going to be under -- feeling any pressure to release the names of all of their donors. They don't have to, but we'll see if they will." Bash mildly suggested their relatives haven’t been nominated for high office.

CNN was happy to tout their scoop that the Obama transition team and the former president signed "a carefully negotiated memorandum of understanding" limiting Bill Clinton’s fundraising and speechmaking. Their hope is that the Senate will consider that a done deal and Senate Republicans won’t insist that the whole idea of naming the spouse of a former president with a massive international foundation is an unprecedented maze of conflicts of interest:

BASH: Now, earlier this month, Bill Clinton's foundation and the Obama transition signed a carefully negotiated memorandum of understanding. And it laid out the role that he should have should Hillary Clinton actually become secretary of State. You see it on the wall behind me. It was actually circulated to senators on the Foreign Relations Committee today. Of course, that committee will hold confirmation hearings for Hillary Clinton.

We obtained a copy of it. Now, in it, Wolf, Bill Clinton agrees to limit his role in leading and raising money for the foundation. Also, he promises to contact the State Department or, if need be, the White House counsel's office before making any personal speeches or contracts for consulting issues.

BLITZER: Now, legally, he didn't have to do any of this.

BLITZER: But he did it because he wants his wife to be secretary of State...

BLITZER: ...potentially there could be a conflict. But the other living former presidents, as far as I know, Jimmy Carter and George Herbert Walker Bush, they haven't released the names of their -- their contributors to their libraries and their other foundations or whatever.

BASH: Right. It is absolutely an important point that it is not the law, because it is private. And this is completely political, that Bill Clinton is doing this. In fact, you remember, there was a big fight when Hillary Clinton was running for president over whether or not he would release them. They refused all along. Up until this point, you know, he wouldn't do it.

It is noteworthy and it certainly has been pointed out to me by Clinton associates today that there are reports that George H.W. Bush got about a million dollars from the government in Saudi Arabia for -- for his library. So it is not necessarily unusual, but, obviously, this is an incredibly politically and dicey and touchy issue for former presidents.

BLITZER: Yes, I would guess that not just Saudi Arabia, a lot of other countries in the Gulf and the Middle East provided funds for the first President Bush's library in Texas, as well.

BLITZER: I wonder if they're going to be under -- feeling any pressure to release the names of all of their donors. They don't have to, but we'll see if they will.

BASH: Not unless somebody gets nominated for something in the future. We'll see.