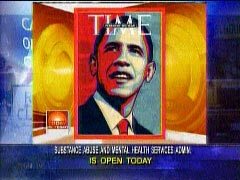 With the level of surprise set firmly at zero – Time magazine routinely chooses the presidential election winner as Person of the Year – Time gave that honor to Barack Obama on Wednesday. But the first peek at David Von Drehle’s cover story shows that Time’s gooey valentines to Obama know no end. The headline is "Why History Can't Wait."

The President-elect has that "Obi-Wan Kenobi calm," and yet is "the opposite of flashy, the antithesis of rhetoric: he gets things done. He is a man about his business – a Mr. Fix It going to Washington." Compared to Bush in the aftermath of Hurricane Katrina, Obama represents change so indelibly that even sinking three-pointers on the basketball court drive home the point: "in the land of the hapless, the competent man is king." Hillary tried to say Obama was all talk, "Yet he was the one whose campaign ran like clockwork, while hers was a fratricidal mess. And by Nov. 4, the strongest party in the U.S. was no longer the Republican Party or the Democratic Party; it was the Obama Party."

By now we are all accustomed to that Obi-Wan Kenobi calm, though we may never entirely understand it. In a soothing monotone, he highlights the scariest hairpin turns on his itinerary, the ones that combine difficulty with danger plus a jolt of existential risk.

It's unlikely that you were surprised to see Obama's face on the cover. He has come to dominate the public sphere so completely that it beggars belief to recall that half the people in America had never heard of him two years ago – that even his campaign manager, at the outset, wasn't sure Obama had what it would take to win the election. He hit the American scene like a thunderclap, upended our politics, shattered decades of conventional wisdom and overcame centuries of the social pecking order. Understandably, you may be thinking Obama is on the cover for these big and flashy reasons: for ushering the country across a momentous symbolic line, for infusing our democracy with a new intensity of participation, for showing the world and ourselves that our most cherished myth -- the one about boundless opportunity – has plenty of juice left in it.

Von Drehle’s article opened a few paragraphs earlier with the Time staffers marveling at the contrast between Obama’s grubby transition office and the glowing historical figure in their minds. They confess their desire to get him a nice leather chair:

It is here that we find Barack Obama one soul-freezingly cold December day, mentally unpacking the crate of crushing problems -- some old, some new, all ugly -- that he is about to inherit as the 44th President of the United States. Most of his hours inside the presidential-transition office are spent in this bland and bare-bones room. You would think the President-elect – a guy who draws 100,000 people to a speech in St. Louis, Mo., who raises three-quarters of a billion dollars, who is facing the toughest first year since Franklin Roosevelt's -- might merit a leather chair. Maybe a credenza? A hutch?

But he doesn't seem to notice.

Obama doesn’t seem to notice the furniture, Time’s readers are told, because he’s so devoted to fixing America, and that glittering historic election is all behind him: 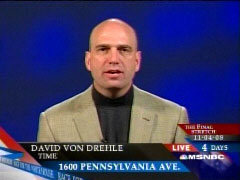 But crisis has a way of ushering even great events into the past. As Obama has moved with unprecedented speed to build an Administration that would bolster the confidence of a shaken world, his flash and dazzle have faded into the background. In the waning days of his extraordinary year and on the cusp of his presidency, what now seems most salient about Obama is the opposite of flashy, the antithesis of rhetoric: he gets things done. He is a man about his business -- a Mr. Fix It going to Washington. That's why he's here and why he doesn't care about the furniture. We've heard fine speechmakers before and read compelling personal narratives. We've observed candidates who somehow latch on to just the right issue at just the right moment. Obama was all these when he started his campaign: a talented speaker who had opposed the Iraq war and lived a biography that was all things to all people. But while events undermined those pillars of his candidacy, making Iraq seem less urgent and biography less relevant, Obama has kept on rising. He possesses a rare ability to read the imperatives and possibilities of each new moment and organize himself and others to anticipate change and translate it into opportunity.

Obama’s ascent began with a hurricane striking New Orleans, which to Time magazine laid bare the incompetence of Bush’s Washington:

In some tellings, Obama's journey to the White House started with his little-noticed but carefully nuanced speech against the Iraq war in 2002. In other versions, it began with his electrifying address to the Democratic Convention in 2004. Those moments blazed with potential, true, but something more was necessary: a certain appetite among the electorate. The country had to be hungry for the menu he offered, and in that sense, his path's true beginning lay in the drowned precincts of New Orleans in the sweltering, desperate late summer of 2005.

Hurricane Katrina blew away the last gauzy veil from an ugly specter of executive incompetence in American politics. When the people of New Orleans needed leadership, the Republican Administration in Washington proved useless. The Democratic governor and mayor were pitiful. At long last, our government was united — but under an appalling banner of fecklessness. The moral bankruptcy of the spin doctors was laid bare: no soul remained gullible enough to believe that Brownie was doing a heckuva job.

After Katrina, demand collapsed for the very qualities that Obama lacked as a candidate: empty boasts, finger-pointing, backstabbing and years of experience inside a government that couldn't deliver bottled water to the stranded citizens of a major U.S. city. Spare us the dead-or-alive bravado, the gates-of-hell bluster, the melodrama of the 3 a.m. phone call. A door swung open for a candidate who would merely stand and deliver. Simple competence — although there's nothing simple about it, not in today's intricate, interdependent, interwoven, intensely dangerous world.

Obama’s vaunted adaptability meant breaking campaign promises, like his promise to meet with the Republican nominee about staying within the established public-finance system limits for presidential candidates. But Time didn’t think that was half as important as Obama’s oh-so-promising competence:

Voters were invited to believe because Obama kept delivering the goods. Certainly he made mistakes and gave up on some ideas while doubling back on others — his promise to stick to the existing campaign-finance system, for example. On the whole, though, he was a doer....

Obama told people that a black man could win white votes. In Iowa he proved it. He said a broad-gauge campaign could win in GOP strongholds; along came Indiana and Virginia and North Carolina. He declared that a new approach to politics would topple the old Clinton-Bush seesaw, and topple it he did. He sank the three-pointer with the cameras rolling. Made a speech in a football stadium feel intimate. Some might say these are not exactly Churchillian achievements, but in the land of the hapless, the competent man is king. In the end, his campaign e-mail list numbered some 13 million people, of whom more than 3.5 million put actual skin in the game -- money, volunteer hours or both. Obama's most formidable opponent, Hillary Clinton, tried to convince voters that he was all talk and no action, a vessel empty but for intoxicating fumes. Yet he was the one whose campaign ran like clockwork, while hers was a fratricidal mess. And by Nov. 4, the strongest party in the U.S. was no longer the Republican Party or the Democratic Party; it was the Obama Party.

Time's glowing encomiums are anything but new for its readers. Don't forget that Nancy Gibbs just finished making comparisons between Obama and Jesus in their November 17 post-election cover story:

Some princes are born in palaces. Some are born in mangers. But a few are born in the imagination, out of scraps of history and hope....Barack Hussein Obama did not win because of the color of his skin. Nor did he win in spite of it. He won because at a very dangerous moment in the life of a still young country, more people than have ever spoken before came together to try to save it. And that was a victory all its own.