Alterman on Colbert: Liberals Ignore God, But Jesus Is a Liberal 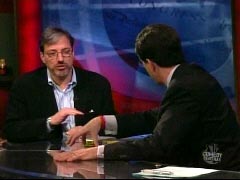 Eric Alterman was the latest in a long conga line of liberal authors plugging their books on Comedy Central’s The Colbert Report on Monday night. He began by confusing the audience about God. Liberals refuse to take orders from God (since he doesn’t exist, or isn’t important enough to take orders from) or the Fatherland (conservatives-are-Nazis jokes always work with the stilted studio audience). But in the next breath, Alterman was claiming Jesus for the liberal side:

COLBERT: But God is truth. Jesus said I am the way, the truth and the light [sic]. What part of that don't you understand?

ALTERMAN: Jesus was a liberal. There he is [on the Alterman book cover], right next to Willie Nelson.

ALTERMAN: There used to be liberal Republicans before you and I were born.

This raises the natural rebuttal: If Jesus were a liberal, why wouldn't liberals take orders from Him?

Alterman at least pretended not to understand that Colbert isn’t really a conservative, he just plays a conservative buffoon on TV for liberals’ amusement. Colbert asked why proclaiming a liberal isn’t a "dark secret" you shouldn’t admit these days. Alterman protested: "Friends of yours, Rush Limbaugh, Bill O'Reilly, those guys have been beating up the name so much, have been associating with all these horrible things, that even people who are liberals are afraid to call themselves liberals."

He also carried on with his line that conservatism has the virtue of being unsophisticated, unlike the deep intellectual complexity of liberalism: "Liberalism is about truth, and truth is complicated, Stephen, I’m sorry...truth is complicated and that’s actually one big problem liberals have. It is hard to say what it means to be a liberal in just a few sentences. Conservatives can say X, Y, Z – They ignore it when they come to power, but they can say it. Whereas liberals have a more complicated case to make."

Alterman’s complaint about the conservative conspiracy to destroy the glory and honor of the word "liberal" is remarkably broad, encompassing the broadcast networks and PBS. To page 73 of Why We’re Liberals:

As discussed above, the conservative movement – frequently aided by the putatively liberal members of the mainstream media – has invested many millions of dollars in sullying the good name of liberals and making a mockery of their true beliefs. This effort involves well-funded foundations, think tanks, newspapers, cable stations, talk-radio programs, Internet sites, gossip columnists, PBS programs, publishing houses, and network broadcast programs – to say nothing of the resources of the Republican National Committee – all of whom have made a concerted effort to vilify and dishonor the word liberal, associating it with all manner of weakness, treachery, and immorality. (Italics his.)

If Colbert were truly a conservative, he could have just read this passage and exploded in laughter. But he’s not. He’s a liberal sheep in plastic wolf’s clothing. According to Tom Edsall at The Huffington Post, Alterman had prepared a different cover of his book, dominated by a cartoon of Colbert saying the words "Why We’re Liberals."

Edsall quoted Alterman suggesting it was shunned from the show since they "hate when guests try to be funny." But it also underlines the truth that Colbert is a liberal, and The Colbert Report is all about making liberals laugh at fake conservatives. It’s quite funny for Alterman to appear on this show complaining about simplistic mockery of the other side’s true beliefs.

Update 18:27 | Matthew Sheffield. Alterman's liberalism-is-too- complex-to-explain point is a typical one of non-thinking lefties who apparently lack the capacity to realize that one can easily make the case that the reverse is true. Here's an example:

This is a pathetic argument. What Alterman and many other shallow thinkers fail to realize is that neither political philosophy would have survived had it not developed reasonably coherent intellectual arguments on its behalf. If conservatism or liberalism were merely bumpersticker mentalities, neither would have gotten anywhere.

I also have to take exception to Alterman and others who attempt to place modern political arguments into the mouth of Jesus who during his life had nothing to say about the issues of our time because...he didn't live in our time. To try and fit Jesus into any modern political paradigm is incredibly facile.