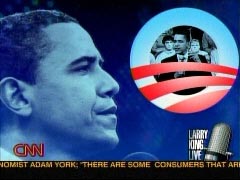 Barack Obama granted an hour-long interview to Larry King on CNN last Thursday night, and just like Anderson Cooper, King was generous and unchallenging to the Democratic front-runner, allowing him to unfurl answers that ranged from one minute to three and a half minutes. At the show’s beginning, King first mentioned the minister controversy, but CNN actually didn’t ask a single question about it until 32 minutes had elapsed on the show, and then devoted just 20 minutes to it (not counting ad breaks). King began:

KING: I guess most people would be saying, why not just leave the church of Reverend Wright? I know you have been in that church a long time, been close to him. He has a major involvement in your family, but based on what he said, why not just say goodbye?

OBAMA: Well, he has retired, Larry. So you know, he preached his last sermon already.

KING: But that was the church.

Obama then talked for a minute and 55 seconds about how some of Wright’s comments were unacceptable, but the church is a very normal African-American church that talks about God and sin and mercy.

King then, perhaps typically, didn’t ask a new question, just enabled another answer: "You are saying it wasn't the church, it was him. And since he is not there, you are still in the church."

That enabled Obama to go for another two minutes and seven seconds about how the Wright soundbites are not representative of his preaching, of three services a week over 20 or 30 years.

Then King asked: A couple of other things in that area. Have you have had any communication with the reverend since all of this?" Obama answered for 59 seconds, including:

Well, you know, I haven't. He was actually -- because, as I said, he preached his last sermon. He is on sabbatical. He went to take a cruise. He was not available by phone.

You know, I had spoken to him earlier when some of these sermons first came to light. I had spoken to him earlier and told him that, you know, I was uncomfortable and objected strongly to some of these statements. But that, you know, obviously he had played an important part in bringing me to my faith, and that I hoped our relationship would continue. 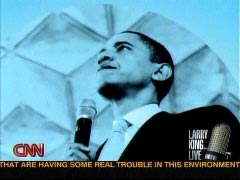 CNN’s love for Obama was evident as they went to commercial with grand photographic images of Obama, and a clip of Obama declaring at a town meeting, "If we could just get past the divisions of race and religion and region, then there is nothing we could not do, no destiny we could not fulfill." It’s a line that clearly doesn’t match his preacher’s scorning, pessimistic, divisive style.

After the break, King broke into even friendlier territory for Obama, blatant spin control on behalf of the candidate:

KING: We’re back with Senator Obama. What might be the other side of the coin, Martin Marty, who is white, and one of America's foremost theologians, has known Reverend Wright for 35 years, attended many of his services, and is quoted in today's New York Times defending the reverend. He says, "You hear hope, hope, hope. It's not anti-white. I don't know anyone who walks out of there not feeling affirmed." How would you comment on that?

OBAMA: Well, Martin Marty I think is one of the greatest theologians that we have. And I think his characterization is accurate. As I said, there's been a caricature of Reverend Wright and the church that's been out there. Now, given the reckless and offensive statements that have been played, it's understandable that people have a negative reaction. And I understand that. And as I said, Reverend Wright's comments were inexcusable.

But I do think it's important just to recognize that this has been a church that's been the pillar of the community, that is part of a 99 percent white denomination, the United Church of Christ. People come to visit from within the denomination. They come from all across the country, mostly white visitors, always feel welcome. There are white members of the church.

And so there has been some distortion, in terms of what this church is about. It's engaged in tremendous ministries, in reaching out to people with HIV/AIDS. It has been very progressive on issues, for example, related to gays and other social issues that are difficult, but the church has dealt with in a generous, and hopeful, and welcoming way.

There was no question from Larry about Rev. Wright accusing the government of infected blacks with the HIV virus. Obama’s answer lasted a whopping three minutes and 33 seconds. Is this an interview show, or just a soapbox?

After that one question and the speech that followed, CNN had another ad break, but King promised they’d talk about Obama’s white grandmother, and they showed 30 seconds of his speech on how he could no more disown Wright than his own grandmother. King then tried to help Obama bail water out of his sinking boat again by asking: "You called her today a ‘typical white person,’ meaning what, Senator?

Obama took the opportunity to say Grandma wasn’t racist, but she has been frightened out of rationality by the media (not that they’ll object):

Well, what I meant really was that some of the fears of street crime and some of the stereotypes that go along with that, you know, were responses that I think many people feel. She's not extraordinary in that regard. She's somebody who I love as much as anybody. I mean, she has literally helped to raise me.

But those are fears that are embedded in our culture and embedded in our society. And, you know, even within our own families, even within a family like mine that is diverse, you know, there are those gaps in understanding or the stereotypes that are fed by the news media and fed by what we see around us and, you know, in our popular culture. And so the point I made is, is that good people, people who are not in any way racist, are still subject to some of these images and stereotypes and that it's very hard to escape from them.

The whole answer was 76 seconds long.

King wrapped up the race segment of the show: "Do you think all this might hurt your campaign?" Obama then turned to campaign boilerplate for one minute and 42 seconds. After the last ad break, they shifted to whether Hillary could be his vice president, and the Clintons in general.

No one expects Larry King to act like Tim Russert on a prosecutorial Sunday morning, but when a candidate like Obama is in serious need of damage control, it ought to be acknowledged that when CNN offers up an hour of King, they aren't so much performing an act of journalism as an act of charity. That was certainly true in the case of this Obama interview.