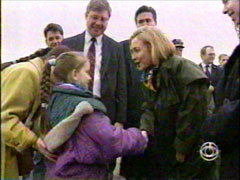 The Washington Post is aligning its Fact Checker with Rich Noyes of NewsBusters. On Saturday's front page, the Inside box reads: "Four Pinocchios! Hillary Clinton has talked of coming under sniper fire during a 1996 trip to Bosnia. Our Fact Checker shoots that tale down." In the Michael Dobbs "Fact Checker" feature, four Pinocchios means not just fact-shading or exaggerating, but "Real whoppers." (It wasn't prominently featured on the washingtonpost.com home page.)

Dobbs wrote on Saturday that "Clinton's tale of landing at the Tuzla airport "under sniper fire" simply is not credible. Photographs and video of the arrival ceremony, complete with contemporaneous news reports, tell a very different story. MRC offered up the evidence out of our cavernous video archive. Dobbs offered up his own journalistic travels and other Post reporters in casting grave doubts on her story:

As a reporter who visited Bosnia soon after the December 1995 Dayton peace agreement, I can attest that the physical risks were minimal during this period, particularly at a heavily fortified U.S. air base, such as Tuzla. Contrary to the claims of Hillary Clinton and former Army secretary Togo West, Bosnia was not "too dangerous" a place for President Clinton to visit in early 1996. In fact, the first Clinton to visit the Tuzla Air Base was not Hillary, but Bill, on Jan. 13, 1996.

Had Hillary Clinton's plane come "under sniper fire" in March 1996, we would certainly have heard about it long before now. Numerous reporters, including The Washington Post's John Pomfret, covered her trip. A review of nearly 100 news accounts of her visit shows that not a single newspaper or television station reported any security threat to the first lady. "As a former AP wire-service hack, I can safely say that it would have been in my lead had anything like that happened," Pomfret said.

According to Pomfret, the Tuzla airport was "one of the safest places in Bosnia" in March 1996 and "firmly under the control" of the 1st Armored Division.

Far from running to an airport building with their heads down, Clinton and her party were greeted on the tarmac by smiling U.S. and Bosnian officials. An 8-year-old Muslim girl, Emina Bicakcic, read a poem in English. An Associated Press photograph of the greeting ceremony, below, shows a smiling Clinton bending down to receive a kiss.

"There is peace now," Emina told Clinton, according to Pomfret's report in The Post the next day, "because Mr. Clinton signed it. All this peace. I love it."

The first lady's schedule, released on Wednesday by the National Archives, confirms that she arrived in Tuzla at 8:45 a.m. and was greeted by various dignitaries, including Emina (whose name has mysteriously been redacted from the document). Footage from CBS shows Clinton walking calmly out of the back of the C-17 military transport plane that brought her from Ramstein Air Base in Germany.

Among the U.S. officials on hand to greet Clinton at the airport was Maj. Gen. William Nash, the commander of U.S. troops in Bosnia. Nash told me he was unaware of any security threat to Clinton during her eight-hour stay in Tuzla. He said, however, that Clinton had a "busy schedule" and may have got the impression that she was being hurried.

We at MRC are often skeptical of major-media fact checkers as we are of the politicians they're checking. But this Hillary story is easily dismissed, and it's a credit to the Post when they apply the Pinocchios on both sides of the political fence.