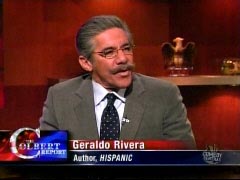 Geraldo Rivera of Fox News keeps proving the ideological diversity of the FNC staff on his book tour attacking opponents of illegal immigration. On Tuesday night, he appeared on the Comedy Central show The Colbert Report, where liberal comic Stephen Colbert pretends to be a conservative, played heavily over the top for laughs. Rivera repeatedly punched away at what he called "right-wing talk show thugs." He was so enamored of the phrase that he inserted it strangely into Irish-hating episodes from 100 years ago, and into his 2005 defense of Michael Jackson against charges of child abuse. MRC’s Melissa Lopez did the transcript. It began like this:

RIVERA: "Driven by the right-wing talk show thugs, there’s a campaign against Hispanics and immigrants that has been very distressful."

COLBERT: "Campaign against them? They’re invading our country, sir."

RIVERA: "We’re scapegoating them. We're blaming them for everything. I’d be surprised… I wouldn't be surprised if Eliot Spitzer's hooker turns out to be an illegal on Lou Dobbs’s show, lead the show with it."

COLBERT: "Now Lou Dobbs is a friend of the show here."

A little later, the subject of the Irish surfaced:

COLBERT: "You say, are you saying that we shouldn't be blaming recent immigrants for our problems? We have a long tradition of doing that, sir. We blamed the Irish a hundred years ago and then the Italians, and the Irish helped us blame them. Why can’t the Hispanics join with the rest of us in blaming the Muslims? Then we’d all be together."

RIVERA: "It may come to that, but there is a maddening tendency once your group gets over the immigrant bridge to burn the bridge so no one else can get over it. The Irish definitely encountered the same kind of hostility. It must have been some equivalent to right-wing talk show thugs then too. You know, if you read the stories, they burned their quarantine centers. No Irish need apply. It was something that was very general."

The reference to the Jackson case came when Colbert turned the topic to Geraldo’s moustache, which he said he’s sported for 40 years straight:

COLBERT: "You have you've never shaved it off."

RIVERA: "I have never. I came close in the Michael Jackson case. I was so confident he would be acquitted that I said if he was convicted that I would shave my mustache because all of the pundits, driven by the right-wing talk show thugs --"

RIVERA: "Michael Jackson is also an easy target. And you know, they all said he was going to be convicted. He was a pervert and the case wasn’t there. I said I would shave my mustache if he was convicted. So certain was I that he would not be."