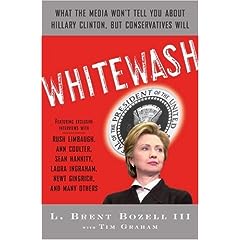 In Sunday’s Washington Post Book World, senior editor Alan Cooperman reviewed four new political books in brief, including a new book from Media Matters for America titled Free Ride: John McCain and the Media by David Brock and Paul Waldman. Cooperman concluded that, oops, the title doesn’t match the rough reporting coming out from newspapers on McCain’s alleged hypocrisy (and adultery?) with lobbyists. We also appreciate the mention of our Hillary-bias book:

Late last year the folks who run the Media Research Center, an outfit dedicated to unmasking liberal bias, came out with Whitewash, a book about how the mainstream media have shamelessly "shilled" for Hillary Clinton.

Now the people who run Media Matters for America, which is dedicated to unmasking conservative misinformation, are offering Free Ride, a book about how the mainstream media give John McCain "a positive spin for nearly everything he does."

Oops. Bad timing. Just a few weeks before Free Ride's publication, along came the New York Times and The Washington Post with hard-hitting, front-page stories on McCain's ties to lobbyists. The Times story, in particular, sparked outrage in the McCain camp by suggesting that the leading Republican presidential candidate may have had an affair in the late 1990s with telecommunications lobbyist Vicki Iseman.

At least, the Clinton and McCain campaigns can see eye-to-eye on one thing: The mainstream media are far too favorable to Barack Obama. A book about that cannot be far off.

I know how Brent would want to avoid having the two groups blurred into identical twins. MRC and Media Matters are two types of media bias organizations, one on the right, one on the left (Hillary's left pantleg, I believe). We also have the same publisher (different divisions of  Random House). But we have very different ways of operating. In our studies, we try to stick to news reporting. Hillary's team spreads the search for "misinformation" all over radio and the Internet and opinion sections everywhere, trying to make everyone avoid the biased "mainstream" media roaring behind the curtain.

They're also more rigid in conceding that sometimes, on some days, the bias tilts their way. But where the MRC will allow that Hillary Clinton hasn't always received a "free ride," scholars like Waldman have baldly stated that liberal media bias is a figment of the conservative imagination, something that never surfaces. It should be fun to rifle through their pages when we can locate a copy.

UPDATE: Newsweek, a corporate cousin of the WashPost, discussed the book with Waldman in a web exclusive, and speaking of "free rides," Matthew Phillips doesn't suggest the slutty-Iseman story in the Times put a big dent in the book's theorizing. Instead, he takes the Brock-Waldman thesis as eminently reasonable, and leads lovingly with his chin:

Why is that? Is it just that he's a likable 'straight talker'? Or are we all suckers?
It's both. You have to understand that the way McCain deals with the national media is a strategy. He realized that reporters want to be treated differently than the way most politicians treat them, which is very carefully and being measured with what they say, going off the record a lot. And that's frustrating for reporters. What McCain figured out was not to be careful, not to go off the record, to return their calls and talk about anything for as long as they wanted. And the results have paid off very handsomely for him, because he gets the benefit of the doubt all the time.

The whole interview couldn't have been nicer if Waldman bought an infomercial (right down to the question about how Hillary Clinton is so much more substantive than Obama!) Realizing the glow of utter servility from Newsweek, Waldman abstains from judging his shoeshine stand:

How does NEWSWEEK stack up?
I'll politely abstain from making that judgment, thanks.