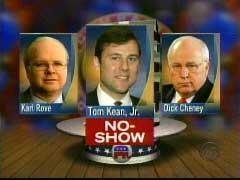 What’s politically toxic in Campaign 2006? On the CBS Evening News Friday night, Katie Couric covered the U.S. Senate race in New Jersey, and the danger was apparently a Republican standing anywhere near Team Bush. Couric pressed Republican candidate Tom Kean Jr. about President Bush: "Would you like him to come?" The second time she asked, she giggled. She weirdly compared the Kean family to the fictional mob family in The Sopranos. (Would she ever do that to the Kennedys?)

Couric ever-so-barely revealed "scandal has wracked the Democratic Party here," but gave no specifics. Newly appointed Sen. Bob Menendez is facing a federal probe for renting out his property to a community group, and then securing millions in federal grants for that community group. At the very least, liberal groups the networks often use as expert sources, like Public Citizen and the Center for Public Integrity, say Menendez is guilty of a conflict of interest. But CBS viewers would have no idea. They just heard Menendez say it’s "smear tactics to hide a right-wing agenda."

Couric made the whole story about the Republican challenger with a household name in New Jersey -- not a bad thing in itself, but unlikely without the scandal. (Menendez is a rare Latino in the Senate, as are freshman Sens. Ken Salazar and Mel Martinez.) Over pictures of fathers changing into photos of their sons, Couric began: "Here comes the son. This election year a number of famous sons of political fathers running for the U.S. Senate. Former President Jimmy Carter's son Jack is running in Nevada. In Pennsylvania it's former Governor Bob Casey's son, Bob Jr. In Tennessee, former Congressman Harold Ford Sr.'s son, Harold Jr. And tonight we take you to New Jersey, where former Governor Tom Kean's son, 38-year-old Tom Jr., has also thrown his hat into the ring. The son also rises, or will he? Here's tonight's 'Eye on Politics.'"

Why not the other Juniors? None of them are a commute away from the New York studios. 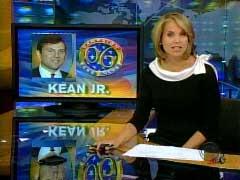 Couric began the taped piece, over scenes from HBO's The Sopranos: "New Jersey's first family of crime on prime time. Their world is a tough one, but some say not near as tough as real-life New Jersey politics, especially this year's Senate race. Take it from Christie Todd Whitman, a former governor."

Former Governor Christie Todd Whitman (R-NJ): "Politics in New Jersey is not for the faint of heart."

"Some say" that mob life, organized racketeering and murder, is "not near as tough" as New Jersey politics? It would be nice for CBS to challenge that "someone" to go on camera and say that like they believed it. (Especially as CBS showed footage of Tony Soprano shooting a guy in the heart.) Couric did not explain why Menendez was appointed: Sen. Jon Corzine won election as Governor after Gov. Jim McGreevey resigned in 2004, saying he was resigning because he was a "gay American." He also faced a bevy of corruption problems.

Couric: "Bob Menendez knows that, a long-time Congressman who was appointed to the Senate, he was supposed to be a shoo-in to keep the seat. But then along came Republican State Senator Tom Kean Jr, and this song by New Jersey's own Bruce Springsteen could have been written for him."

Audio of Bruce Springsteen singing: "Baby, we were born to run."

State Senator Tom Kean Jr. (R-NJ): "I grew up in a household that valued public service and firmly believed that one person could make a difference."

Couric: "If the Sopranos are New Jersey's fictional first family of crime, New Jersey's first family of politics is definitely the Keans. [Katie, who has a definite affinity for the Kennedy family, would never touch this kind of comparison for them. See her recent online reflection celebrating what would have been Jack and Jackie's 53rd wedding anniversary.] The family has been in the game since the American Revolution. Junior's father, Tom Kean Sr., was elected governor of New Jersey twice and could have been elected again and again if not for term limits. New Jersey voters loved Tom Kean the father. They're not sure about the son just yet."

Couric: "New Jersey voters haven't elected a Republican to the U.S. Senate in 34 years, when Tom Kean Jr. was four. But scandal has wracked the Democratic Party here." 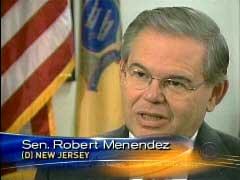 Senator Robert Menendez (D-NJ): "He supports the war. He supports privatizing Social Security, something I oppose. He opposed increasing the minimum wage in New Jersey."

Couric: "But the latest polls have Kean ahead. The Republican Party smells blood, and is helping him raise money. But when Karl Rove and Vice President Dick Cheney hosted fund-raisers for Kean, Junior didn't show. Why? Because in blue New Jersey, this President isn't popular. And Menendez knows it."

Couric to Kean: "You say you're planning to have your father campaign for you. What about President Bush?"

Kean Jr.: "The President's got an open invitation to come to this state." 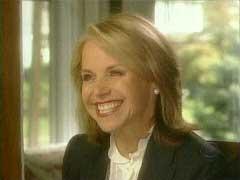 Couric, holding up hand to ear to mimic a phone call: "So if he called you today and said, 'Tom, I'm coming up tomorrow to campaign for you,' you would say?"

Couric, on the CBS News set: "The fact is, Tom Kean Jr. knows he needs his father's name more than he needs a photo op with the President of the United States to win this race."

See the CBSNews.com version (with video) here. Couric's intro and last line are not included.