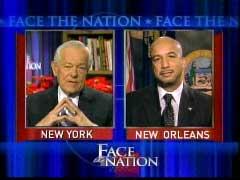 There's a reason or two why Tim Russert rules the Sunday morning news show roost. One of them is he asks tough questions based on preparation. By contrast, on Sunday's "Face the Nation," Bob Schieffer displayed the opposite. His interview with New Orleans Mayor Ray Nagin looked like the questions of someone who did no homework, like CBS pulled a man out of a Denny's and told him to play journalist -- and they were certainly questions that avoided any kind of toughness on Nagin.

1. "Let me just start off with a question that a lot of people around the country are asking, and that is: are you going to have Mardi Gras this year? I know a lot of people down there say maybe it’s not such a good idea. What do you think will happen?"

2. "How is New Orleans right now? What’s the population of the city?"

3. "Do you think New Orleans will ever be as big as it once was? And what was it, nearly half a million people?"

4. "Well, I know you’ve got a lot of the French Quarter up and running, as it were. How about your other business? How many businesses are back in operation?"

5. "And what about housing? Talk about that a little bit. How much of that that you lost have you gotten back?"

6. "How about help, Mr. Mayor? Are you getting what you need now from the federal government? We all know what happened in those days after this hurricane hit, but where does all that stand now?"

7. "Mr. Mayor, there were some hearings; things got pretty hot and heavy. A lot of e-mails got released on both sides. How do you feel about this whole idea of investigations? Do you want to see more emphasis on that, or do think we need to move on to other things? I’d just like to get your personal take on that."

(Nagin faced tough questions at a House hearing on December 14, but CBS didn't cover it.)

8. "Well, if you had to make a wish list right now, Mr. Mayor, what would it be for this coming year? What do you need? What are the priorities? Where does all this have to go to get New Orleans back to where it was?"

Don't listen to Schieffer or anyone at CBS marvel at how the government would work without the sentinels at CBS demanding accountability on behalf of the people. That didn't happen Sunday.