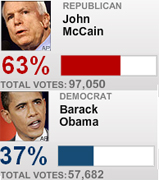 With all the mainstream media emphasis on poll numbers that supposedly show strong leads for Barack Obama I was wondering if there should be any analysis of an AOL straw poll that shows John McCain solidly beating Barack Obama in a random sample of hundreds of thousands of readers. A major difference between the AOL straw poll and that of other polls is that the AOL poll does not consist of people that are chosen by the pollsters.The poll runs over a number of days and is repeated on a weekly basis.

I wrote about this poll on September 14th. It asks one question, vote for your candidate of choice. Two weeks ago the three day poll had amassed 321,168 samples, with 60% of the votes going to John McCain. The poll continues this week. As of September 25th the poll had counted 154,732 votes and McCain picked up 3 percentage points from the week before, leading Barack Obama by a 27 point margin, 63% to 37%.

In June it appears that John McCain's lead was only 8 points after some 200,000 responses according to a Hillary blogger. This is the type of swing that would be relevant to me as it represents a change in AOL readers that bothered to participate. Unfortunately I can't find history on the AOL page.

I am not an expert on polls but it seems to me that the AOL poll is without the kind of bias that can be injected by pollster samples and then touted by the media as an advantage for Obama. The AOL straw poll has been relatively low profile and you must use a captcha to vote. It has been running for a while now and the results have been fairly consistent. The bias it does have would likely come from the demographics of AOL readers. The poll appears to be an outlier and I have no clue how closely a poll of this type tracks real votes. AOL states that it is not a scientific poll. In other words it just captures the votes that readers put in. Simple.

I wouldn't have McCain supporters getting overly excited about this poll just as I wouldn't have them overly worried about polls that oversample democrats or African Americans to artificially hype Barack Obama.

Criticism of online straw polls actually runs counter to the narrative about democrats and the internet. It is often explained as socioeconomic bias, whereas the rich and wealthy have more access to computers. Of course we are told that Democrats are more likely to use the internet so take it with a grain of salt. In the case of this poll perhaps there is some bias of that nature as I can't believe all states are going to go for McCain. Real Clear Politics tells a much different picture.

Nonetheless we are supposed to suspend reality and believe all the polls the media touts without reservation. Me, I am a little more skeptical. If the AOL poll is of any value it would be in substantiating my skepticism about polls in general. Still, the consistency of this recurring poll is something to ponder.

Terry Trippany is the publisher of Webloggin and holds the post as The Watcher at Watcher of Weasels.