Vieira to Airline CEO: You're the Reason Planes Don't Fly! 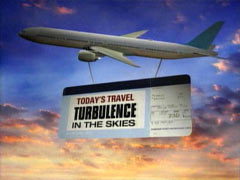 “Do you fly to San Francisco by any chance?...OK, I have to go out there, are you going to promise me, guarantee me, that if I buy a ticket at the end of August you won’t cancel that flight?”

That was NBC “Today” show host Meredith Vieira’s final question in an interview with Northwest Airlines CEO Douglas Steenland. Vieira phrased the question as though it was Steenland’s fault that a high number of flights had been cancelled earlier in the summer. To Vieira weather, mechanical problems, and Air Traffic Control apparently played no part in it.

“I don’t doubt your sincerity,” she said before questioning his sincerity, “but do you understand … um … some of the anger that’s been directed at you? I mean these pilots, for example flight attendants, they took pay cuts, to help save this airline at the same time you were given almost $27 million in stock and stock options.”

Steenland corrected her, reminding her that stock gains depend on how the company does in the next few years – he wasn’t “given” $27 million.

“First, Meredith, that number is simply wrong,” he said. “In 2006 I received a fraction of that number in terms of what my compensation was. I’ve taken a 20-percent reduction in base salary, and I voluntarily didn’t accept incentive payments that were due to me. If you look at my compensation compared to other Fortune 500 CEOs, I’m in the bottom 10 percent. I did get a stock grant – it’s going to be four years before we know if I realize all of it, and it’s entirely based on what the value of the company is. There are no guarantees involved.”

According to USA Today, while Northwest comes out of its restructuring process, “Steenland could get stock and stock options worth $27 million over the next four years under its re-organization plan.” Of course that depends on how well the company does. According to the Minneapolis Star Tribune, Steenland made $1.88 million last year, putting him 38th among CEOs just in the state of Minnesota.

You can find more on this story here.

- Stuart James is a research analyst at the Business and Media Institute.