The Washington Post is a legacy, old school fake news outlet.  Aside from the New York Times, no newspaper carries more national clout.

Largely because of how much they forty-plus years ago made of a third-rate burglary by a Republican presidential campaign on its way to winning forty-nine states.  (Had Republicans not broken into the Democrats’ Watergate headquarters, they’d have won, what…forty-three states?) 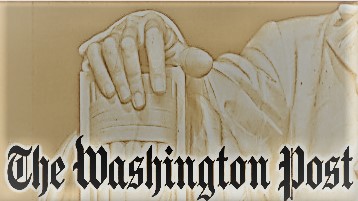 There were about a half dozen Barack Obama Administration scandals that were each exponentially worse than Watergate - about which the Washington Post couldn't have cared less.  Worse, the Post provided all sorts of cover-up “coverage” of these monstrosities - routinely, incessantly defending the indefensible.

No section of the Post deviates from the Leftist favoritism.  Let us look at the Tech section - and a “reporter” by the name of Brian Fung.

On Friday, Fung dropped the following “bombshell.”  Except the key components - were entirely fake news.

The FCC’s Independent Chair is Getting Too Cozy with the White House, Critics Say: “(S)eparate meetings organized around the same event have also included a smattering of government officials, including on Thursday the head of the Federal Communications Commission (FCC), Ajit Pai….

“On another level, though, Pai's presence was unusual: As the head of an agency that's supposed to keep its distance from the White House, Pai has shown no qualms about appearing on the same agenda with President Trump. And that is now raising questions among some about his overall independence from the Trump administration.”

Cue the uber-Left “sources” the Washington Post and all the rest of the “media” keep on speed dial:

“It is a White House function in which he should not have taken part,’ said John Simpson, an advocate at Consumer Watchdog. ‘They should be going the extra mile to be independent from the White House. It is incumbent upon the chairman and the commissioners not only to act independently, but to avoid any appearance of conflict.’” 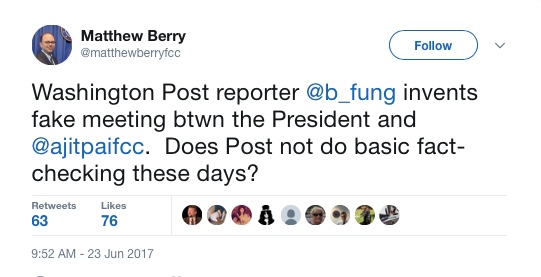 “The Washington Post suggested that Pai met with Trump on Thursday as part of a larger meeting with tech industry leaders. While Pai did attend a breakout session with tech leaders as part of a general conversation about policy, he did not meet with Trump.

“He left at 9:45 a.m. for an FCC Open Meeting, according to the spokesman. 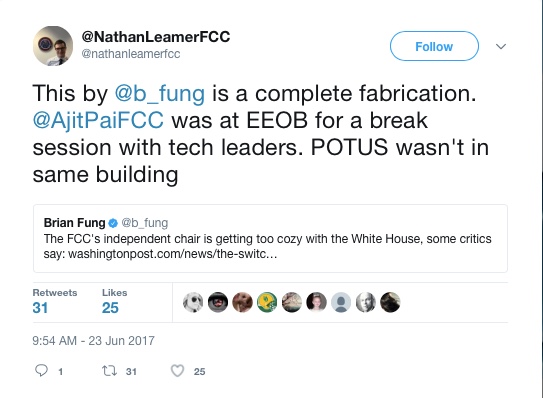 “‘It was not based on the facts of yesterday’s events,” (said) a source close to the Chairman….”

Fung and his Post - delivering us a heaping helping of fake news.

Now, let us flashback to some actual, very-much-in-evidence collusion between an FCC Chairman and a White House.  It’s early 2015.  It’s President Barack Obama, his FCC Chairman Tom Wheeler - and their push for a huge new Internet regulatory power grab (known as reclassification) so as to then impose the totally awful Network Neutrality.

Well it wasn’t Wheeler’s push for reclassification - until Obama demanded it.  Wheeler wan’t going to reclassify, but then….

President Obama to FCC: Reclassify Broadband Service as Title II to Protect Net Neutrality: “President Obama is urging the FCC to reclassify consumer broadband service — to open it to broader government oversight and regulation — with the goal of protecting the net neutrality principles that his administration has long supported.

“In a lengthy statement that also included a video, Obama asserted ‘there is no higher calling than protecting an open, accessible and free Internet.’ He urged the FCC to reclassify broadband service as a Title II telecommunications service….”

That just screams “independent agency,” does it not?

Chairman Wheeler - then suddenly, magically decided to reclassify the Internet.  And ludicrously offered up:

FCC Chair: No, the White House Didn’t Give Me ‘Secret Instructions’ on Net Neutrality

No, Obama and his White House were quite open and straightforward about it.  It was on WhiteHouse.gov.  There was video involved.  And lots and lots of news stories.

Obama to the FCC: Adopt ‘The Strongest Possible Rules’ on Net Neutrality, Including Title II: “President Obama on Monday called for the government to aggressively regulate Internet service providers such as Verizon and Comcast, treating broadband like a public utility as essential as water, phone service and electricity….

“This is Obama's most aggressive statement yet in favor of a free and open Internet and against allowing Internet service providers to charge content companies like Netflix for faster access to their customers. The president's statement, released online Monday while he traveled to Asia, calls for the FCC to adopt the strictest rules possible for ensuring so-called net neutrality, or the principle that all Internet traffic should be treated equally.”

Where was Fung’s nose for collusion news?  Where were the frantic calls to sources for corroborating collusion quotes?

Nowhere to be found.  And when Republicans pointed out the very obvious White House-FCC coordination - Fung went into full-spin defensive mode.

Read the E-Mails that Republicans Say Show Obama Meddled in Net Neutrality: “House Republicans are putting the head of the Federal Communications Commission, Tom Wheeler, through the wringer this week over his agency's recent vote to apply strong new regulations on Internet providers.”

As opposed to you and the rest of the media putting Trump and Chairman Pai “through the wringer” - over nonsense nothing.  More Fung:

“The GOP’s chief criticism these days is that Wheeler and his staff improperly coordinated with the White House over how to write those regulations.”

Yes, Fung, you reported on it.  There was those WhiteHouse.gov Web pages, and the video - remember?  But the “wringer” Republicans had more than just that:

“GOP lawmakers…are releasing previously redacted e-mails between FCC officials and members of the White House staff, lobbyists and others.…”

All of this seems to be a whole lot more coordinate-y than a Trump White House tech event - at which Trump and Chairman Pai were never even in the same room.  Fung didn’t freak out - he fell in line behind the Obama Administration spin.

TWICE.  The aforementioned “FCC Chair: No, the White House Didn’t Give Me ‘Secret Instructions’ on Net Neutrality” - was also Fung.  In which he “reported”:

“‘Nine times you went to the White House,’ Rep. Jim Jordan (R-Ohio) said. ‘On Nov. 6, Jeff Zients comes to you. … My contention is, Jeff Zients came to you and said, “Hey, things have changed.”’”

Nine times.  How very Ferris Bueller of them.

Yet nowhere in either of Fung’s two stories does he mention collusion, coordination or collaboration - unless he’s quoting Republicans making the assertion.

One Trump White House tech event - at which Trump and Pai never even share a room - and Fung is throwing around every word that starts with “C” of which he can think.

And doing it un-factually - in fake news fashion.

“Not even a smidgen" of Washington Post bias, eh?