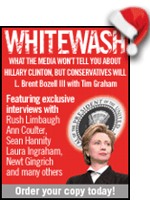 Whitewash, written by MRC's very own President L. Brent Bozell III with Director of Media Analysis Tim Graham and the tome for all your Christmas giving needs, was reviewed most excellently by Phil Brennan of and for the most excellent publication NewsMax.

Behold some of the many extraordinary excerpts therefrom:

In the book "Whitewash: What the Media Won't Tell You About Hillary Clinton, but Conservatives Will," by L. Brent Bozell and Tim Graham, the inside cover asks, Why Hillary? "How did the first lady to a disgraced impeached president become a presidential front-runner despite never having held elective office before 2001; her staggering number of personal political and financial scandals and her leftist political agenda?"

The authors have a ready answer: a media so enamored of Hillary Clinton that they have no problem shamefully protecting, defending, promoting, covering up her numerous scandals, and relentlessly advancing her presidential ambitions.

Beginning with an examination of the Gennifer Flowers scandal that broke at the time Bill Clinton was seeking the presidency, Bozell and Graham show how the media leapt to the Clinton's defense, setting the pattern it would follow from that point on - no matter how well documented the charges against the Clintons were, they were victims of a smear while the accusers were always villains.

Wrote the authors: "reporters knew all along that Bill Clinton was a serial adulterer and therefore also a serial liar about his sham of a marriage. That made Hillary a serial liar of course as she repeatedly aided and abetted that myth with statements of her own. This too, the media accepted."

Perhaps the worst characterization of St. Hillary came from Newsweek’s Evan Thomas, grandson of the late Socialist presidential candidate Norman Thomas. He described Hillary as “a Joan of Arc figure, persecuted for her righteous crusade.”

From the first bimbo eruptions to Hillary’s current campaign for the Democratic Party presidential nomination where the media allows her to dance gracefully away from anything but the softest of questions, “Whitewash” chronicles the career of a woman whose dark side is carefully concealed by a subservient media which all but sanctifies her.

Rush (Limbaugh) summed up it all up: "The drive-by media, as I call them, is a giant cover-up machine for the Clintons. To this day it is participating in helping write a legacy of Bill Clinton because his administration did not produce one that is suitable and positive so the quest goes on to write the positive . . . Hillary is part of it.”

With this invaluable expose, Brent Bozell has broken through the soft curtain the media has kept between Hillary Clinton and the American people. He shows conclusively that the so-called mainstream media cannot be trusted to report the facts about their beloved Hillary, or for that matter, anything else.

The truth is not in them.

It is always nice to have eminence acknowledged by and with eminence.