CHAOS: One Year of the Networks Hiding Biden’s Afghanistan Disaster 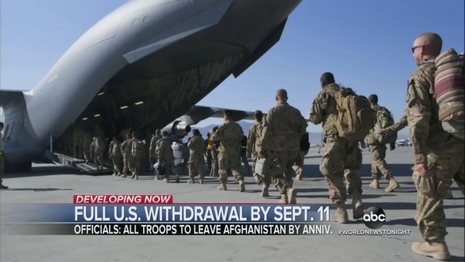 Just over one year ago, on August 26, 2021, 11 Marines, a soldier, and a sailor were killed when a suicide bomber detonated a device at the Kabul airport in Afghanistan. The horrific incident was the culmination of Joe Biden’s disastrous pull-out of American troops.

And while the month of August 2021 saw heavy network evening newscast coverage of the disaster, 409 minutes, it quickly fell off a cliff over the next year. By July of 2022, ABC, CBS and NBC’s nighttime programming allowed just a scant seven seconds.

The fall in the amount of coverage was quick and steep. August 2021’s total of 409 minutes fell to 92 in September and 16 minutes in October. By November, World News Tonight, the CBS Evening News and the NBC Nightly News managed just over ten minutes of coverage for the ongoing disaster. It’s also important to note that when there was Afghanistan coverage, the words “Joe Biden” were often missing from the stories.

The numbers would continue trending mostly downward through the spring and summer of 2022. 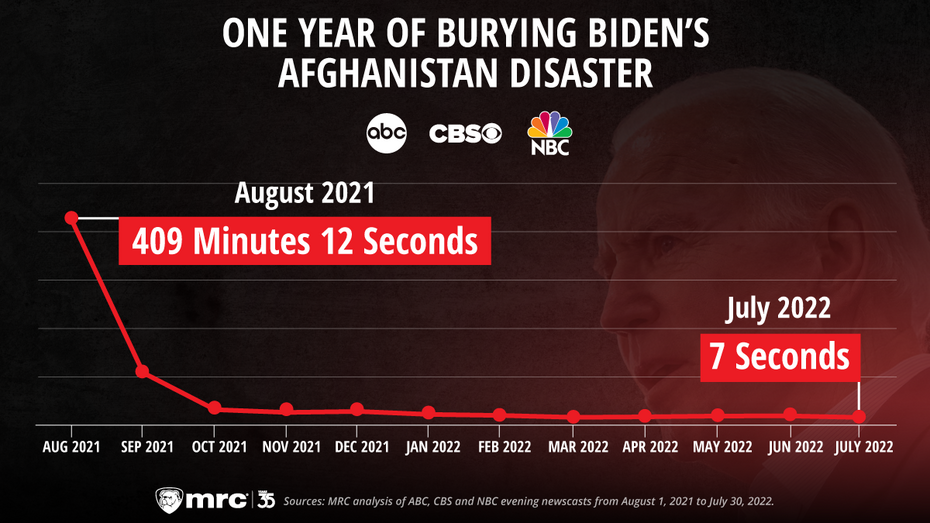 It’s not as though life under the Taliban suddenly became peaceful and quiet once the President removed U.S. troops. For instance, January 2022 saw a mere six minutes and 31 seconds of evening newscast coverage. But the reality on the ground was chaos, suffering and death. When journalists bothered to cover Afghanistan, they actually seemed to notice the severity of the disaster.

In a January 28, 2022 Nightly News segment, anchor Lester Holt warned, “We want to turn now to the crisis in Afghanistan. Five months after the chaotic U.S. withdrawal, a humanitarian disaster is unfolding.” Reporter Kelly Cobiella lamented, “It’s been five months since the chaotic and deadly U.S. withdraw....The airport almost looks normal. But on the streets, people are desperate. Some selling their kidneys for cash.”

Explaining the bleakness of the situation, she concluded, “Meanwhile, Americans are still stranded here along with thousands of America’s Afghan allies.” This two minute and 48 second NBC News segment represented almost half of January’s total coverage.

Two words not spoken in the entire month of January in connection to Afghanistan: “Joe Biden.” The Afghanistan crisis seemed to be almost an act of nature with no one really in charge.

Back in December, there were a few mentions of Biden's handling and language that often described an apocalyptic disaster. On the December 15, 2021 World News Tonight, anchor David Muir recounted the “horrifying” breakdown of civilization:

Overseas, tonight, our team is back in Afghanistan, and what they’ve witnessed is truly horrifying. A humanitarian crisis now unfolding. Children on the edge of starvation, a two-year-old weighing just 11 pounds. And with the Taliban now in control, ISIS is now taking aim at them.

But the alarmed tone of Muir and others didn’t match the amount of interest by the networks. Just 12 minutes and 52 seconds in December.

The first two months of summer 2022 saw almost a complete collapse of coverage. In June, just three minutes and 31 seconds. July was even worse: A shocking low of just seven seconds and all of that came from World News Tonight. In an otherwise unrelated story on veterans, one service member noted, “Everyone I knew in the veteran community had a mental breakdown when Afghanistan fell.”

That was it for the month. No utterances of the name Joe Biden and no stories on Afghanistan.

By August of 2022, interest in the Afghanistan disaster ticked up again. The networks ran retrospectives on what happened the previous year and on the heroics of U.S. servicemen during the chaotic withdrawal. But they continued to downplay Joe Biden’s role in overseeing the debacle.

When it comes to the media, history is often a guide. With autumn and the 2022 midterms coming, journalists will likely go back to ignoring the perilous situation in Afghanistan. After all, Joe Biden is a Democrat and he must be protected. Even if that means ignoring chaos, suffering and death in a dangerous Afghanistan.