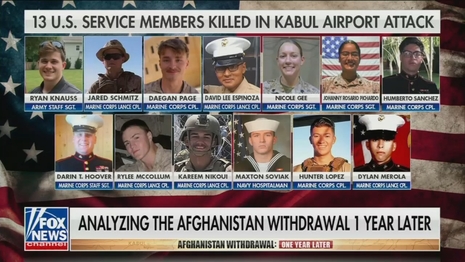 UPDATE: Two of the three evening newscasts on Friday night managed to cover the anniversary. See end of post for full update.

One year ago on Friday, August 26, 2021, 11 Marines, a soldier, and a sailor were killed in a suicide bombing during President Biden's botched withdrawal of U.S. troops from Afghanistan. The network morning shows on Friday (and the evening shows on Thursday night) couldn’t be bothered to mark the somber one-year anniversary.

There was no mention on the NBC Nightly News, Today, ABC’s World News Tonight, Good Morning America or the CBS Evening News and CBS Mornings.

NBC, however, found time to mark a far less important anniversary: 75 years of the children’s book Goodnight Moon. The Today show on Friday featured host Hoda Kotb reading the book and touted how viewers could download her audio recording of it. She narrated, “In the great, green room, there was a telephone and a red balloon.”

ALL of this focus on the anniversary of a children’s book and not the loss of 13 U.S. service members. As The Washington Examiner explained on Friday, family members of those who died aren’t happy with how the Biden administration has treated them:

The 13 U.S. service members who were killed on Aug. 26, 2021, along with roughly 170 Afghan civilians when an Islamic State terrorist detonated a suicide vest outside the Kabul airport gates included 11 Marines, one Navy hospital corpsman, and one Army soldier. Dozens of other U.S. troops were also injured in the blast. The attack occurred as the United States led evacuation operations at the Hamid Karzai International Airport as the Taliban, including Haqqani Taliban faction forces, provided security outside the airport.

Their loved ones expressed deep feelings of frustration with Washington and with President Joe Biden in particular, whom they accuse of not caring about their loss. They also highlighted newfound ways to honor and promote the legacies of their loved ones, who died helping desperate Afghans flee the repressive return of Taliban rule.

Given the media’s desperate attempt to protect Joe Biden, it shouldn’t be surprising they are hiding this sad anniversary. On August 12, during general discussions of the disastrous August 2021 month, Joe Biden’s name came up for just 28 seconds.

Fox, Newsmax and other cable outlets covered the one year anniversary on Friday. Kudos to them for doing actual journalism. Here's Fox and Friends from Friday:

UPDATE: On Friday night, NBC Nightly News anchor Lester Holt got to the story in a brief mention: “It's been exactly one year since a suicide bomber killed 13 troops at a Kabul airport during the chaotic U.S. withdrawal from Afghanistan.” On ABC's World News Tonight, guest anchor Whit Johnson updated:

One year ago, 13 U.S. service members were killed in Afghanistan. It happened during the chaotic U.S. withdrawal from the country after 20 years of war. A suicide bomber struck at the airport gate. More than 100 civilians were also killed. President Biden today saying he is praying for the families and loved ones who lost a piece of their soul.

The disgraceful ignoring of the death of 13 American service members was sponsored on CBS by Progressive insurance, on ABC by Dove soap and on NBC by Citi cards. Click on the link to let them know what you think.