UPDATE: CBS Morning allowed an additional 21 seconds on Thursday. This brings the grant total to 40 seconds on the three networks.

The FBI on Tuesday seized the phone of Republican Congressman Scott Perry, yet you wouldn’t know it if you watched that night’s evening news or Wednesday’s morning news programs. CBS and NBC completely buried the story. ABC’s Good Morning America on Wednesday allowed a scant 19 seconds to the development, which happened in the wake of the FBI raid on Donald Trump’s home. The lack of interest in Perry is quite the contrast to the attention garnered from the 2006 raid on the home and office of Democratic Representative William Jefferson.

Here’s the quick mention from GMA’s Karl on Wednesday: “And in an entirely separate investigation, Republican Congressman Scott Perry, a staunch Trump ally, revealed overnight that the FBI sized his cell phone, Perry says he was traveling with his family at the time.”

“This morning, while traveling with my family, 3 FBI agents visited me and seized my cell phone. They made no attempt to contact my lawyer, who would have made arrangements for them to have my phone if that was their wish. I’m outraged — though not surprised — that the FBI under the direction of Merrick Garland’s DOJ, would seize the phone of a sitting Member of Congress,” Perry said in his statement. "My phone contains info about my legislative and political activities, and personal/private discussions with my wife, family, constituents, and friends. None of this is the government’s business.”

On May 20, 2006, Democrat William Jefferson’s congressional office and home were raided and $90,000 in cash was found in his freezer. For a week, the networks devoted 26 stories to the raid and highlighted bipartisan skepticism.

On the May 22, 2006 NBC Nightly News, Pete Williams lectured, “Today, some in Congress, including Bill Frist, the Senate Republican leader, said they're concerned about the FBI raiding a Capitol office.”

On the May 23, 2006 CBS Morning News, Gloria Borger noted, “But now even top Republicans are concerned that the FBI overreached when it searched Jefferson's office.” She featured then-Senate Majority Leader Bill Frist: “I am very concerned, as well, with what happened over the weekend.”

For the May 27, 2006  CBS Evening News, reporter Wyatt Andrews warned, “Because the FBI works for the president, the argument is the executive branch should not launch surprise raids on Congress.”

But when they were done showcasing the bipartisan outrage against the raid, the networks shifted to protection mode. For instance in 2009, they mostly failed to identify Jefferson as a Democrat after hew as convicted on bribery charges, simply referring to him as a “former Congressman.”

Quite the contrast to 2022 and the move against Congressman Perry.

ABC burying the story was sponsored by Dick's Sporting Goods. On NBC, it was Cadillac. On CBS, it was Progressive insurance. Click on the links to let them know what you think.

Here's the transcript of the quick GMA  mention: 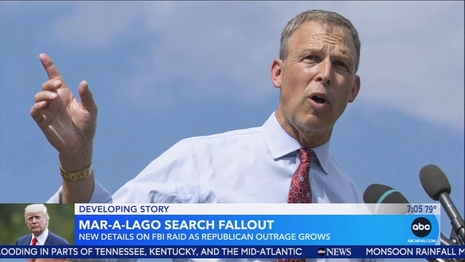 JON KARL: And in an entirely separate investigation, Republican Congressman Scott Perry, a staunch Trump ally, revealed overnight that the FBI sized his cell phone, Perry says he was traveling with his family at the time. Perry is the subject of a separate DOJ investigation believed to be related to January 6th.