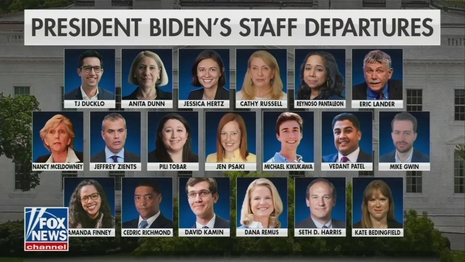 Another day, another Biden/Harris staffer is fleeing an increasingly unpopular White House. According to the Real Clear Politics average, Joe Biden is in the 30s in seven of the last nine approval polls, including a record low 36 percent from Reuters. Just last week, White House Communications Director Kate Bedingfield announced she is leaving. But you wouldn’t have known it as the networks ignored the latest departure.

But that’s a pattern as they have repeatedly ignored numerous high and not-so-high profile staffers leaving the unpopular Democrat. Here’s just a few Biden staffers that received not a single mention upon their departure.

According to Fox News, at least 25 key staffers have left since 2021. Here’s a dozen staffers for Vice President Kamala Harris who have left with no network notice:

A rare exception is the departure of White House Press Secretary Jen Psaki. On May 5, when it was announced that she was leaving, ABC’s World News Tonight, the CBS Evening News and the NBC Nightly News all noticed — although briefly. ABC managed 17 seconds, NBC 14 and CBS 13 seconds.

And most of that was to note the historic nature of her replacement. Here’s Ed O’Keefe on the May 5 CBS Evening News: “Meanwhile, here at the White House, plans for a new press secretary. Karine Jean-Pierre is set to become the first black person, first openly gay person to serve in the role. She's set to succeed Jen Psaki, who is stepping down next Friday.”

As The Washington Examiner explained on July 7, Biden staffers in 2021 left the White House at a higher rate than Donald Trump and Barack Obama. Considering how unpopular the current president is, that can’t be too surprising. But it’s not something journalists want to investigate.

PETER DOOCY: So, if you think... your plan is popular with the American people, is it just that the plans are not being communicated properly and is that why the communications director is leaving?

JEAN-PIERRE: Oh, that's where you were going with this question! That's very slick there of you, Peter.

DOOCY: Well, why — why is she really leaving?....At a time that a historic number of people think the country is on the wrong track Somebody who has been a part of Bidenworld for as long as just about...anybody here says that she is leaving.

JEAN-PIERRE: — well, first, let me say, I explained that we understand what the American public is feeling. The President is doing everything in his power to lower costs, to blunt gas prices as he has been doing and we have —

DOOCY: And you’re making a change.

JEAN-PIERRE: — we have done that. So, I wanted to speak about Kate for a second because I think this is really important. I have known Kate since 2007. She is a friend and she is a colleague. She is exceptionally talented and she will be greatly missed. Her smart skills and hard work helped get the President elected and has helped us accomplish so much since we’ve been here.

As I noted in an April NewsBusters study on White House departures, even CNN is gossiping about the mass exodus. Last December, CNN.com explained the dysfunction at the White House with unhappy staff:

Worn out by what they see as entrenched dysfunction and lack of focus, key West Wing aides have largely thrown up their hands at Vice President Kamala Harris and her staff -- deciding there simply isn't time to deal with them right now, especially at a moment when President Joe Biden faces quickly multiplying legislative and political concerns.

Why is the unpopular Biden administration failing? Why are so many staffers leaving? Who will abandon ship next? These are questions that network journalists aren’t asking. But they should be. Americans deserve to know if they have a functioning, healthy White House. The press certainly asked these questions during the Trump years.