Just How WRONG Were ABC and NBC’s Climate Predictions? (Hint: NYC Not Underwater) 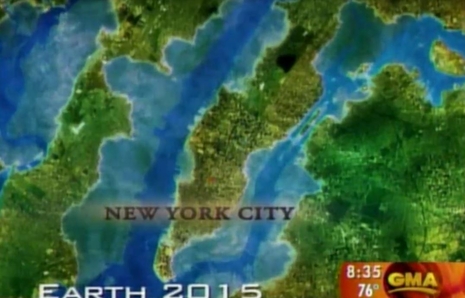 Two wildly wrong climate predictions have anniversaries in June. And since ABC and the NBC-owned SyFy Channel don’t like to be embarrassed by explaining their botched global warming prognosticating, we’ll do it for them.

Fourteen years ago, on June 12, 2008, ABC’s Earth 2100 offered a special on the then-far off year of 2015. Correspondent Bob Woodruff revealed that the program "puts participants in the future and asks them to report back about what it is like to live in this future world. The first stop is the year 2015.”

The special featured one of ABC’s experts warning that in 2015 the sea level would rise quickly. An on-screen graphic showed New York City being engulfed by water. (Spoiler alert: That didn’t happen.)

Interestingly, the special included predictions such as this one from the future world of 2015: “Gas reached over $9 a gallon.” Now, while gas was actually $2.75 on that day, it IS skyrocketing in 2022. However, the causes are energy and production related. Not the apocalypse.

On June 13, 2008, ABCNews.com promoted the special by hyperventilating, “Are we living in the last century of our civilization?” The special made predictions all the way through 2100. (A “storm of the century” wipes out Miami. By 2084, Earth's population will apparently be just 2.7 billion.) Check back in the decades to come for those claims.

On June 14, 2006, the not-yet-disgraced Matt Lauer hosted a special for the SyFy channel ominously titled Countdown to Doomsday. (We're still here so the countdown must be continuing.) Lauer blamed his fellow humans: “We are the problem.”

Predicting a quick end to civilization, the NBC host offered the tired (and debunked) warnings of overpopulation:

Today, life on Earth is disappearing faster than the days when dinosaurs breathed their last, but for a very different reason....Us homo sapiens are turning out to be as destructive a force as any asteroid. Earth’s intricate web of ecosystems thrived for millions of years as natural paradises, until we came along, paved paradise, and put up a parking lot. Our assault on nature is killing off the very things we depend on for our own lives....The stark reality is that there are simply too many of us, and we consume way too much, especially here at home....It will take a massive global effort to make things right, but the solutions are not a secret: control population, recycle, reduce consumption, develop green technologies.

Don’t worry though. The nice thing about DOOM predictions from the media is that you can keep pushing the date back. 2015 may not have submerged New York City, but there’s always 2025? 2031?