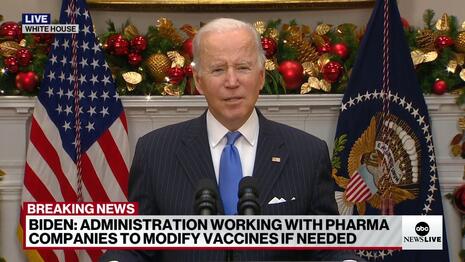 The already unpopular Joe Biden was dealt another blow last week as the Omicron variant emerged. The President on Monday appeared at a press conference to call for calm and to urge people not to panic. But it’s worth reminding the sycophantic Biden press, and the President himself, what they all said about Covid.

As The Wall Street Journal pointed out on Thursday, then-candidate Biden told Americans in the fall of 2020 that Donald Trump, who had 220,000 Covid deaths, “should not remain as President.” The Journal recounted the stark details of what’s happened since:

Covid deaths this year have now surpassed the toll in 2020 with 350,000 since Inauguration Day. It would seem that Mr. Biden has done no better than Donald Trump in defeating Covid despite the benefit of vaccines, better therapies, and more clinical experience.

Yet, as the 2021 death toll mounted, Biden pushed a constitutionally dubious employer mandate and journalists loved it. NBC Nightly News anchor Lester Holt cheered on September 9: “Clearly frustrated by the pace of COVID-19 vaccinations in this country, President Biden tonight is trading out the velvet glove for a hammer.”

On that same day’s World News Tonight, anchor David Muir sounded like DNC talking points: “The President taking aim at local officials that he said are actively working to undermine the fight against COVID by opposing masks and vaccination mandates. He said, ‘I'll get them out of the way.’”

Now that the mandate has been rejected by the courts, it doesn’t look quite so brilliant. Yet on September 9, 2021, the clearly unhinged Joy Reid compared Biden’s actions to George Washington, saying mandates “[go] back to George Washington who’s the first to require vaccinations, I believe for smallpox.” She then insanely compared the Democrat’s actions to Ulysses S. Grant fighting the Civil War:

I've gotta ask you about someone else who, like I would say Ulysses S. Grant — who should have more statues — was decisive today: President Biden. There is a lot of caterwauling going on among Republican governors. We’ll put up the list. 17 so far and counting starting with Greg Abbott who had a weird comment about choice and ending with Tennessee's Bill Lee. We’ll just put that up. They're quite upset with this mandate.