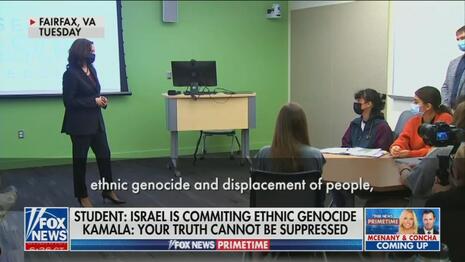 It’s not just Joe Biden senior moments that the media are suppressing. His gaffe-prone Vice President is having her controversies buried as well. Last week, Kamala Harris appeared at George Mason University in Northern Virginia and nodded along as a student spewed hate about the “genocide” committed by Israel. Harris shockingly went on to praise the student, saying her “truth” should not be “suppressed.”

According to a Media Research Center analysis of possible coverage, this appeasing of bigotry was ignored by ABC, CBS and NBC, as well as MSNBC. It was left to a few outlets like Fox News, Fox Business, CNN, Newsmax, OAN and The Times of Israel to cover the September 28th moment. See below for video of the VP and the student.

Note that Harris nodded her head along throughout the bigoted attacks from this unidentified GMU student: “Just a few days ago there were funds allocated to continue backing Israel, which hurts my heart because it’s an ethnic genocide [Kamala Harris nodding] and a displacement of people — the same that happened in America — and I’m sure you’re aware of this.”

She concluded by telling the vice president: “I just feel like I need to bring this up because it affects my life and people I really care about.” Rather than call out the hateful comments, Harris praised them: “Your voice, your perspective, your experience, your truth should not be suppressed.” 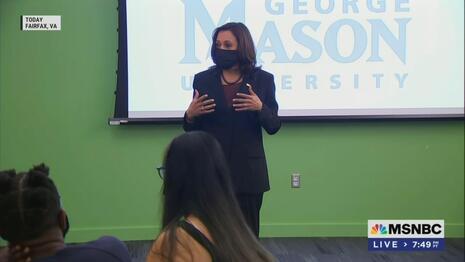 Harris’s GMU visit came up on on MSNBC, Sunday. But, yet again, no mention of the vile attack on Jews.

CNN journalists to their credit, did cover it. The network devoted 6 minutes and 16 seconds on Friday. Jake Tapper alerted:

Harris upset supporters of Israel by failing to correct a student who falsely accused the country of genocide in a question to the Vice President. Groups such as the Anti-Defamation League argued that allowing smears of this kind to stand can incite violence against Jewish people all over the world.

ABC, CBS and NBC? MSNBC? Silence. This is despite the fact that Iran’s state-run TV is now hyping Harris’s acquiescence. As FoxNews.com reported:

Press TV, an Iran-affiliated international outlet, tweeted out the exchange Harris had at Virginia's George Mason University Tuesday with a female student, who raised questions about U.S. monies provided to allies Israel and Saudi Arabia.

According to Politico on Thursday, the Vice President is doing “damage control” after the incident:

Vice President Kamala Harris’ office is working behind the scenes to mend relationships with pro-Israel Democrats after not pushing back on a student who, in asking her a question, accused Israel of “ethnic genocide.”

On Thursday, Harris' senior staff contacted the influential Democratic Majority for Israel to clean up remarks she made Wednesday at George Mason University where Harris was visiting a classroom of students.

Damage control? You wouldn’t know it from most in the corrupt media. For them, it’s just another Biden/Harris debacle to cover-up. Is it any wonder that Americans don’t trust them?

BRIAN KILMEADE: Here’s her interaction with a student. I believe this is George Mason University. Watch.

STUDENT: Just a few days ago there were funds allocated to continue backing Israel, which hurts my heart because it’s an ethnic genocide [Kamala Harris nodding] and a displacement of people — the same that happened in America — and I’m sure you’re aware of this.

KAMALA HARRIS: Your voice, your perspective, your experience, your truth should not be suppressed.

KILMEADE: It just so happens she’s not telling the truth. Genocide? Israel’s committing genocide in Israel?