Another day, another record low poll for Joe Biden. But the media are still doing their best to hide the implosion of the Democrat’s presidency. ABC’s Good Morning America on Friday buried a survey the network did with The Washington Post finding Biden cratering to 44 percent. On Thursday, new polls showed Biden at 43 and 42 percent, also record lows.

GMA allowed a scant 30 seconds to the poll within a larger story about Biden visiting New Orleans. George Stephanopoulos conceded that the President is “facing the lowest poll numbers of his presidency.” Reporter Stephanie Ramos explained, “The latest ABC News/Washington Post poll shows the President's approval rating has fallen to 44 percent down six percentage points since our poll in later June when he was at 50 percent.”

She continued, “Those poor approval ratings reflect the broad disapproval over the President’s handling of the withdrawal from Afghanistan.”

The Washington Post released the poll online on Friday, but it’s not yet in the paper. The online headline led NOT with Biden’s terrible numbers, but this: “Americans support Afghanistan pullout — but not the way it was done, a Post-ABC poll finds.” The article by Dan Balz, Scott Clement and Emily Guskin got to the bad news for Biden in paragraph two:

Americans overwhelmingly support President Biden’s decision to end the war in Afghanistan, but by a 2-to-1 margin they disapprove of how he handled the chaotic and ultimately deadly withdrawal that included the evacuation of several thousand U.S. citizens and tens of thousands of Afghans, according to a Washington Post-ABC News poll.

The Afghanistan withdrawal has contributed to a drop in Biden’s overall approval rating, which for the first time in his presidency is net negative. The poll finds 44 percent saying they approve of how he is handling his job, while 51 percent disapprove. In late June, the numbers were almost reversed, with 50 percent supporting and 42 percent disapproving.

There’s no indication that Biden’s numbers show any hint of improving. But journalists will do their best to hide the bad news for Democrats.

ABC’s desperate attempt to save Biden’s from his terrible polling was sponsored by Cadillac and McDonald’s. Click on the links to let them know what you think.

GEORGE STEPHANOPOULOS: President Biden is heading to New Orleans to survey the damage from Ida, saying his teams are working around the clock to help get basic services up and running as he is facing the lowest poll numbers of his presidency. Stephanie Ramos tracking it all from the White House. Good morning, Stephanie.

STEPHANIE RAMOS: George, good morning. President Biden is traveling to New Orleans, Louisiana, today to survey the damage left behind by Hurricane Ida. He is set to meet with the governor as well as local officials and also taking aerial tours of the hardest hit areas. There are always sensitivities with these kinds of trips but the president said yesterday that the state's governor encouraged the visit and assured him he would not disrupt recovery efforts on the ground. Last night the President and First Lady also made a trip to visit wounded veterans at Walter Reed Medical Center and the White House did not specify if they were —  if the President and First lady met with Marines injured in the Kabul attack last week, but 15 of them are there now. 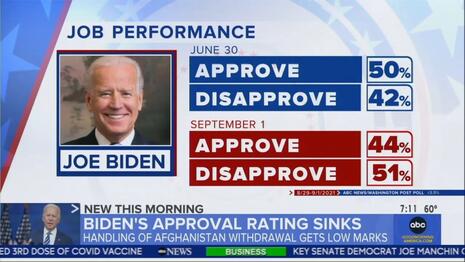 STEPHANOPOULOS: And Stephanie, that Afghan exit has really taken a toll on the President's popularity.

RAMOS: Right, George, the latest ABC News/Washington Post poll shows the President's approval rating has fallen to 44 percent down six percentage points since our poll in later June when he was at 50 percent. Those poor approval ratings reflect the broad disapproval over the President’s handling of the withdrawal from Afghanistan. Even as 77 percent support ending the war, George?