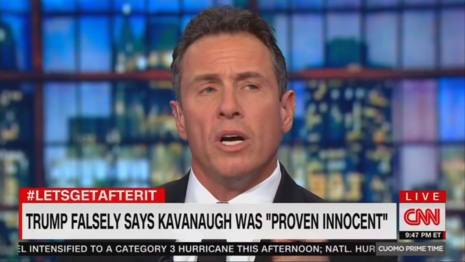 Andrew Cuomo resigned this week under the crushing weight of almost a dozen women accusing him of sexual abuse and harassment. Yet the Democratic governor's brother, CNN host Chris Cuomo, has NOT resigned from his network hosting job. Chris is merely on “vacation.” But although the CNN host destroyed all sorts of journalistic and moral norms by advising his brother on how to dismiss and discredit abuse allegations, he rabidly assumed Bret Kavanaugh was guilty back in 2018.

On September 27, 2018, Cuomo got creepy as he recapped the day’s contentious Supreme Court hearings. The CNN host talked to a Yale classmate of Brett Kavanaugh and dug for dirt on any potential sex life. Sadly for Cuomo, his efforts didn’t succeed. The host awkwardly asked Lynne Brookes this question: “I don't believe it's disqualifying to have partied in high school or in college. But him telling the truth about himself is a more relevant standard. Was Brett Kavanaugh known at Yale as a virgin?”

On October 4, 2018, after Kavanaugh defended himself in a Wall Street Journal op-ed, Cuomo fumed, “We’ve never seen such an overtly political play by a nominee, let alone one who's fighting back criticism that he is too political. But here we are steeped in irony and animosity.”

On October 9, 2018, Cuomo scoffed at the idea that the accused Kavanaugh had a presumption of innocence: “It is a lie to say that the presumption applied here because like I just said here, we're not in a court.”

Huh. One assumes that, when giving secret advice to his brother, he didn’t tell the New York Governor that. Chris Cuomo is a corrupt hack who violates every tenet of journalism. CNN should do the right thing and tell Chris it's time to go.