Andrew Cuomo’s allies in the press, who looked the other way at his years of bullying, are finally abandoning him. Op-eds in The New York Times, The Daily News, The Albany Times Union, even MSNBC, condemned the Democrat accused of sexually harassing and abusing multiple women. (MSNBC.com even demanded that brother Chris Cuomo has to go as well.)

The pressure is on for resignation or impeachment. But just in case these outlets lose their nerve, don't forget what they said now. The Times on Tuesday called the report by the New York Attorney General “thorough and damning.” 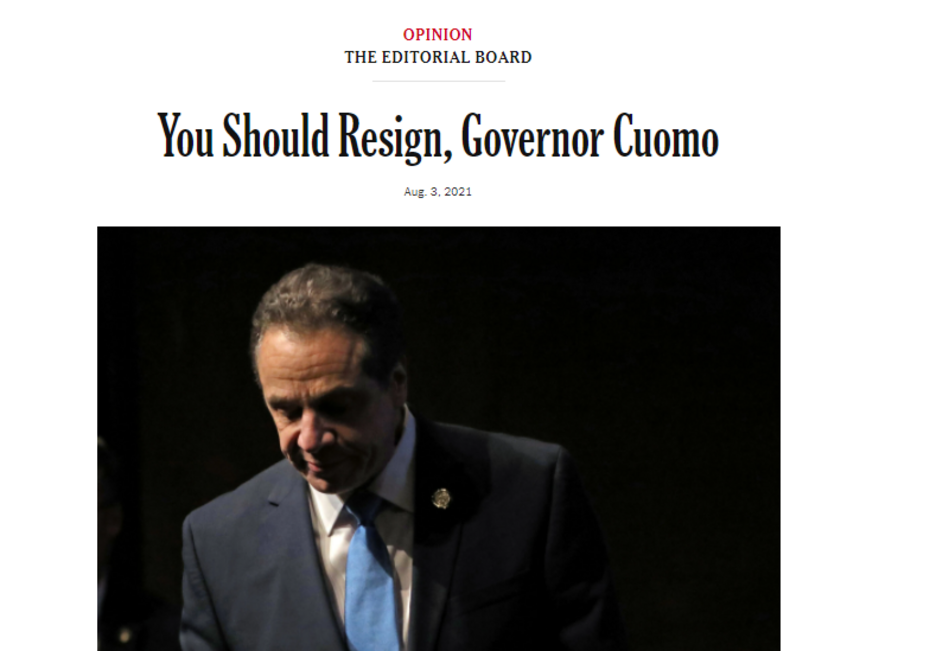 Here’s some of the unsigned editorial:

Mr. Cuomo has always had a self-serving streak and been known for his political bullying. He also has used those traits to be an effective politician and, in many of his achievements as governor, won the public’s trust. What this report lays out, however, are credible accusations that can’t be looked past. As Ms. James said on Tuesday, Mr. Cuomo’s alleged conduct “corrodes the very fabric and character of our state government and shines light on injustice that can be present at the highest levels of government.”

If Mr. Cuomo cares for the well-being of the state and its citizens as much as he has said he does over the years, he needs to do the right thing and step down.

The Times seemed to know that there was a bullying creepiness to Cuomo when the paper was endorsing him. In 2018, the same editorial board wrote:

Strategic and at times bullying in his use of power, driven and maddeningly evasive.

Mr. Cuomo is flawed. When he allows petty enmity and political grievance to distract him from his commitment to public service, he is his own worst enemy. But when he confronts a real problem and gets down to work, he is a very capable governor.

Remember, that was the Times's ENDORSEMENT of Cuomo. The liberal New York Daily News on Wednesday called the report on Cuomo “disgusting and damning in their particulars.” The paper condemned:

Andrew Cuomo should have the dignity and decency to step down rather than continue to lead an executive branch that requires its own managers and thousands of private-sector employers to obey strict laws prohibiting workplace sexual harassment.

The New York Post, a conservative paper that has been calling out Cuomo from the beginning, eviscerated the Democrat: “New Yorkers need a governor they can look up to, someone they can trust as honorable, honest and decent. Cuomo has shown he’s not up to it. It’s long past time for him to go.”

The Albany Times Union on Tuesday conceded that “[we’ve] endorsed Mr. Cuomo for all three of his gubernatorial campaigns.” The paper is now calling on the Democrat’s ouster with this headline: “Editorial: Cuomo is unfit for office.”

Delaying this constitutionally required response until the Assembly Judiciary Committee’s bloated impeachment inquiry has exhausted itself and the taxpayers’ legal bills is no longer an option. The less-compromised staff of the Executive Chamber deserve a workplace free from Mr. Cuomo’s toxicity. And New Yorkers deserve a governor who can devote their attention to the job instead of to their own appetites.

MSNBC.com demanded the removal of not just Andrew Cuomo, but CNN’s Chris Cuomo too: 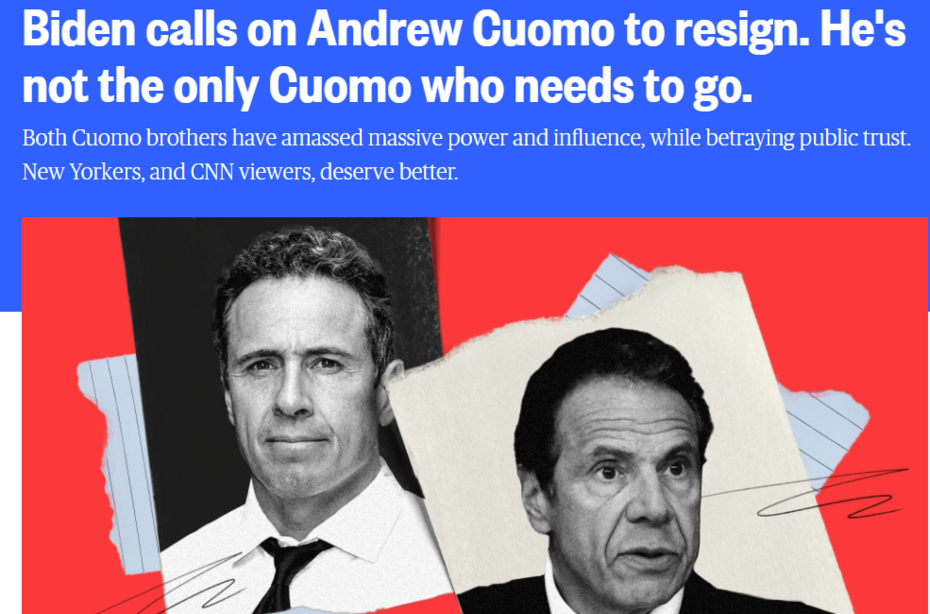 His brother, too, should resign from covering politics or be fired. It’s extremely inappropriate and unethical for a journalist to advise and craft the statements of a politician, regardless of family relation.

It looks as though Cuomo’s days as New York governor are numbered. But people thought the same of Virginia's Democratic Ralph Northam, who in 2019 was embroiled in a shocking black face scandal. He simply refused to go and Democrats and their allies in the liberal media didn’t pressure him. The bullying governor of New York swears he’s not leaving. So will his former liberal allies in the media keep up this pressure? Or will they ultimately back down?