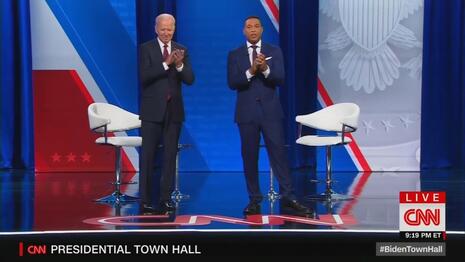 Apparently, Americans don’t want to watch 80 minutes of CNN’s Don Lemon sucking up to Joe Biden. The July 21 town hall special bombed the ratings, losing not only to Fox News (which would be expected), but even MSNBC.

Flood added that regular programming on Fox beat the much-hyped CNN special by a “staggering 83 percent.”

And really, why would people want to watch the Democratic president take Democrat-friendly questions from the Democrat-loving Lemon? The MRC’s Curtis Houck pointed out in his analysis of the event:

The most noteworthy audience question and Lemon interjection came with the eighth question as Cory Marcum (who was likely a Democrat, though Lemon never gave him a label) drew applause when asked if it was “logical to get rid of the filibuster so we can protect our democracy and secure the right to vote” in the face of the GOP “efforts to restrict voting rights.”

Can you imagine 80 more minutes of this? Apparently, even liberals would rather watch MSNBC then the love-fest on CNN.

None of this should be surprising. Since January, CNN’s ratings have plummeted. In the second quarter, for instance, the network endured its worst month in total viewers and the all-important 25-54 demo since June of 2019. CNN also tumbled 71 percent it total viewers. With Trump gone, it seems that the hateful partisan hacks at the network really have nothing to talk about.