Admitting It: CBS Cheers 1619 Project, Touts Idea That Journalism Should Be Activism 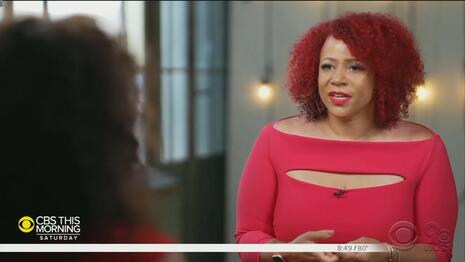 CBS This Morning Saturday embraced the idea that, of course, journalism is activism and we should all just get used to it. Co-host Michelle Miller on July 17 cheered Nikole Hannah Jones, the author of the historically corrupt 1619 Project as the modern day Ida B. Wells, a woman who heroically battled the KKK as she exposed the horrors of lynching.

At no time in the segment did Miller mention the historical misrepresentations of the 1619 Project. Instead, she wondered, “Can you be a journalist and an activist today?” Of course Hannah-Jones said yes:

All journalism is activism. When you look at the model of The Washington Post, right? “Democracy dies in darkness.” That's not a neutral position. But our methods of reporting have to be objective. We have to try to be fair and accurate. And I don't know how you can be fair and accurate if you pretend publicly that you have no feelings about something that you clearly do.

The New York Times journalist might have a point if she actually strived to be “fair and accurate.” She doesn’t. As I’ve noted before, the problem with The 1619 Project is a problem with facts. Distinguished historians, including Pulitzer Prize-winners, hammered the errors. In a 2019 letter to The New York Times, Victoria Bynum, James M. McPherson, James Oakes, Sean Wilentz, and Gordon S. Wood wrote:

We are dismayed at some of the factual errors in the project and the closed process behind it.

These errors, which concern major events, cannot be described as interpretation or “framing.” They are matters of verifiable fact, which are the foundation of both honest scholarship and honest journalism.

There’s also the issue that Leslie M. Harris, professor of history at Northwestern, said the Times was aware of the historical errors at the time of publication. But none of that came up in the segment.

Instead, Miller compared Hannah-Jones to connect herself to Wells, the crusading African American who faced death threats for exposing lynching: “Both women exemplifying courage and strength and truth to power.”

All month, CBS has been acting as the 1619 Project’s PR team. On July 6, This Morning co-host Gayle King hailed the “impeccable” author. The next day, on July 7, the show hid the 1619 Project’s historical lies, suggesting only Republicans oppose it.

The propaganda on CBS was sponsored by Tylenol and Comcast. Click “expand” to read more.

MICHELLE MILLER: On Friday, officials in Memphis unveiled the plaza and statue dedicated to hometown hero Ida B. Wells on the 159th anniversary of her birth. That comes less than three weeks after a statue was erected in Chicago where Wells lived toward the end of her life. Ida B. Wells died 90 years ago, but her legacy of advocacy and journalism continue to inspire a new generation picking up the baton.

NIKOLE HANNAH-JONES: One of my few regrets in life is that didn't go to Howard.

MILLER: As one of the most prominent journalists in America, Nicole Hannah Jones has earned both admiration and scorn. Her 1619 Project reframed American History through slavery and the contributions of black folk. An uncomfortable lens for some.

HANNAH-JONES: I'm not going to let anyone stop me or intimidate me from doing the work that I know is right.

MILLER: But a clue to her unapologetic motivation can be found right here on her Twitter
handle. IdaBaeWells.

HANNAH-JONES: From the moment I pulled her autobiography off the shelf, I was hooked. To this day she's kind of my spiritual godmother.

MILLER: That spiritual godmother is Ida B. Wells, the fearless 19th century newspaper publisher, suffragist and anti-lynching campaigner who exposed the horror of lynchings and enlightened those in denial.

HANNAH-JONES: Here's this woman born in slavery who provided the template for the type of journalism I wanted to, do the type of person I wanted to be. She was one of the nation’s first investigative reporters. She's the reason we began to catalog the number of lynchings.

MILLER:  In 2020, that lifetime of work earned Wells the prestigious Pulitzer Citation, the same year Jones earned her Pulitzer Prize for the 1619 Project.

MILLER: Jones who recently joined the staff of Howard university after a public tenure battle with the university of North Carolina is unabashed. Can you be a journalist and an activist today?

HANNAH-JONES: I get that question a lot.

MILLER: The answer is simple for this journalist and professor who co-founded the Ida B. Wells society for investigative reporting.

HANNAH-JONES: All journalism is activism. When you look at the model of The Washington Post, right? “Democracy dies in darkness.” That's not a neutral position. But our methods of reporting have to be objective. We have to try to be fair and accurate. And I don't know how you can be fair and accurate if you pretend publicly that you have no feelings about something that you clearly do.

MILLER: Both women exemplifying courage and strength and truth to power. And something that Ida B. Wells said -- “The way to right wrongs is to turn the light of truth upon them.” One of the reasons why she was awarded the Pulitzer Citation. And the irony is 2020, you saw this she and -- and Hannah Nikole [sic] Jones earned that Pulitzer prize. When 2021 Darnella Frazier who filmed George Floyd in Minneapolis also was -- had been bestowed the citation, as well. So I mean, it's the activism is clear. The book cites it in many ways from Colin Kaepernick on. It's incredible.