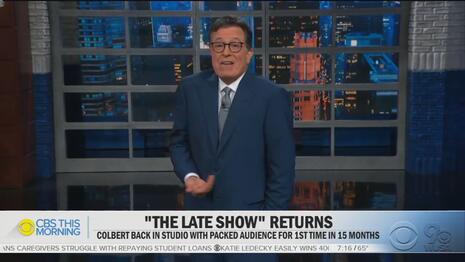 The liberal late night shows have declared war on independents, conservatives, Republicans, anyone who isn’t a hard-left liberal. But the shills at CBS keep pretending that former comedian Stephen Colbert is some sort of national icon, as opposed to a partisan Democrat. On Tuesday, CBS This Morning hailed the return of Colbert as a moment so exciting it will make you shake.

After more than 200 shows from his home, the Late Show host brought back a studio audience on Monday. This Morning co-host Tony Dokoupil declared, “Here in New York, another sign of America returning to normal.”

Reporter Meg Oliver stood outside the Ed Sullivan theater and talked to people waiting in line. One woman was so excited, she couldn’t stop shaking:

OLIVER: Marissa Godfrey, a nurse from Connecticut says her family tuned into Colbert nightly during quarantine.

GODFREY: He’s been a part of therapy for me.

Another man gushed, “Colbert got me through this pandemic.”

Since Joe Biden took office, Colbert and Jimmy Kimmel have become comedians for the state. Kimmel in February said there is “nothing to criticize” the Democrat on. So it isn't the WHOLE country viewing the return of Colbert in studio as a beacon of post-Covid normalcy. Mostly, it's Democrats. But the hosts at CBS This morning don't seem to realize. Or they just don't care.

The hackery at CBS This Morning was sponsored by Toyota. Click on the link to let them know what you think.

TONY DOKOUPIL: Here in New York, another sign of America returning to normal, CBS' The Late Show With Stephen Colbert brought back the audience last night. More than 400 fans packed the Ed Sullivan theater for the first time in nearly 15 months. Meg Oliver is there when she's talking to some of those people. I'm guessing things are not as fun as they were last night, meg. Good morning to you.

MEG OLIVER: No, but it certainly was exciting, Tony. It felt like old times after more than 200 remote episodes, Late Show is welcoming back live audiences including Jon Stewart, and the audience's energy was off the charts from the moment Colbert stepped on the stage. When a clearly elated Stephen Colbert walked on the stage at the Ed Sullivan Theater after more than 400 days away, he was greeted by a nearly minute-long-standing ovation.

STEPHEN COLBERT: I don't know if I even remember how to pander to the most beautiful crowd in the world.

OLIVER: Hundreds waited in line for hours Monday after snagging tickets online. Are you ready for a laugh?

OLIVER: Audience members had to show proof of full vaccinations to attend the show. Guest Jon Stewart said we owe a debt of gratitude to science.

JON STEWART: Science as in many ways helped ease the suffering of this pandemic, which was more than likely caused by science.

OLIVER: Marissa Godfrey, a nurse from Connecticut says her family tuned into Colbert nightly during quarantine.

GODFREY: He’s been a part of therapy for me.

MAN #2: Colbert got me through this pandemic.

A lot of people thought this is going to be years before New York gets back to normal.

OLIVER: Brent Lang, Variety’s executive director of film and media said the return of this staple is also a sign of hope. The majority of theaters set to reopen in mid-September. Broadway brings in an estimated $14.7 billion to the economy and supports nearly 100,000 jobs. When you see this line, what does it symbolize?

LANG: I mean, I think it symbolizes return and revival and restoration. It symbolizes the power and strength of New York City.

COLBERT: We're the first show back up on Broadway. Suck it Lion King.

OLIVER: Tony you mentioned the excitement. I have to tell you along this sidewalk it was contagious, everyone was smiling. Strangers were making friends in line. When was the last time you saw something like that happen? They were so excited to be the first live audience in more than a year. Tony?