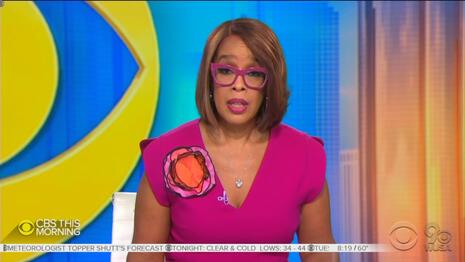 It’s not enough to trash Georgia’s new voting law as racist, now the hosts of CBS This Morning are prompting business leaders to encourage a boycott. After prominent African American CEOs placed an ad in The New York Times calling for corporate America to speak out, Gayle King demanded they do more.

Talking to a former CEO of Xerox, King pressed, “Ursula Burns, there was no call for a boycott even though other people are calling for boycotts. Why was the decision not to go that far?” After reading a quote from a full page ad appearing in The New York Times, King underlined, “But they do not call for an outright boycott of the state.”

Guest host Adriana Diaz hit the same point, asking Ken Chenault, formally of American Express, “In your view, is this your way of urging these companies to not just talk the talk but also walk the walk?” Later, she parroted King, “Is that enough, just to release a statement to make this proclamation? How will that actually bring about change in your view?"

In other words, the state of Georgia has done something CBS dislikes and the network wants the state punished.

On Monday, NBC’s Today hyped possible boycott with co-host Hoda Kotb touting, “Boycotting everything from Coca-Cola to the Masters?” She added, “Inside the growing calls for an economic boycott of the state’s businesses and events, including the Masters and baseball’s All-Star game, coming up after this.

This attempt to intimidate Georgia was sponsored by Lexus and Nissan. Click on the links to let them know what you think.

GAYLE KING: As Republicans in dozens of states seek new limits on how people vote, 72 black current and former business executives are taking a stand against the sweeping new law in Georgia. They put their names on, look at this, a full-page ad running in The New York Times today, page A-7, which says, quote, “Corporate America should publicly oppose any discriminatory legislation, and all measures designed to limit Americans' ability to vote.”

But they do not call for an outright boycott of the state. Two of those executives join us now to discuss. Ursula Burns is a former CEO of Xerox, and Ken Chenault with American Express. Good morning to you both. There are a lot of heavy hitters on this list including the two of you, including the two of you. I know nobody will not take the calls from either of you. So I want to know, Ken, if you could start us off, how did this come about? Did you meet to discuss? What upset you, and what do you want corporate America to do? First, how did this come about?

KEN CHENAULT (Former American Express CEO and Chairman): So, the way it came about, it came about Sunday afternoon. For the past ten days, there has been very heavy -mail traffic and text traffic on what was happening in Georgia and, in fact, what was being proposed in close to 43 states. And what we decided was that we needed to do something that had never been done before, which is African-American executives in corporate America standing up collectively for a social issue. There is nothing more fundamental than voting rights.

CHENAULT: And the reality is what we're doing is we're calling on companies not to make just general statements about the importance of voting and voter suppression, we're saying take a stand, publicly oppose any legislation.

CHENAULT: —  that denies the opportunity to vote.

KING: Ursula Burns, there was no call for a boycott even though other people are calling for boycotts. Why was the decision not to go that far?

URSULA BURNS (Former Xerox CEO): I think that the collective voices of the signatoies on this letter and the reactions and voices from early adopters will be — we're hoping will be enough to actually be a motion against this pretty blatant and I would say ignorant act. So we're hoping that this step is the step that needs to be taken. I would say not agree broadly that if this continues, if we do not see progress, we'll have to convene again and think about the next steps.

ADRIANA DIAZ: You know, this summer when there were protests after the death of George Floyd, so many companies came out of the woodwork making statements denouncing injustice, pulling out ads, commercials. In your view, is this your way of urging these companies to not just talk the talk but also walk the walk?

CHENAULT: Absolutely. At the end of the day, voting rights is fundamental. And here's my point -- if corporations had taken a stand after Brown V. Board of education, that would have made an incredible difference. And for Americans, voting is a lifeblood of democracy. And so what we're saying to companies is all of the words are nice, but we need you to take action. And action is to publicly oppose discriminatory legislation and any measures designed to hinder voting.

DIAZ: Is that enough, just to release a statement to make this proclamation? How will that actually bring about change in your view? How are you hoping it does?

CHENAULT: Here's what's important: corporations have influence. If corporations came out and said relative to the proposed legislation in Florida, “We oppose it.” And in fact worked with legislators and emphasized the importance of this, I think we would see some change. And the reality is corporations have been silent on this issue. And that is why we've said action has to be taken.

KING: Have you had any conversation with white corporate leaders about this, Ursula? Are you concerned about backlash?

BURNS: I'm not concerned at all about backlash, and yes, I've had a couple of conversations with white business leaders. I think we've seen one at least come up publicly last night, JPMorgan came out last night in support of our statement on voting rights and voter suppression. I also want to back up on Ken's point. It's really important to understand that this is not complicated, it's not scientific, we're not looking into anything about when life begins, nothing. This is a right that every American has, plain and simple.

It's pretty simple to implement, and what we're seeing is states starting with Georgia, but others, as well, pushing back in a kind of blatant way. It's surprising just how obvious this is. And we think now that corporate America, black Americans for sure, but anyone who has values in their corporation that talk about diversity, equity, and inclusion, any company that has a value statement about valuing their employees has to stand with our statement because their employees, black, white, Hispanic, women, literally are going to be affected by this type of suppression.