CBS Evening News anchor Norah O’Donnell is very excited about her Super Bowl interview with Joe Biden and the journalist did several interviews herself with other reporters, touting the Democrat as “channeling FDR” because of his love of fireplaces. In an chat with CBSN's Lana Zak on Saturday, gushed over Biden’s love for fireplaces: “I’m told he lights the fire himself in the Oval Office most morning even though there are plenty of butlers and White House staff in order to do that.”

Can we fact check whether Biden lights all the fires in the White House fireplace? Don’t hold your breath.

O'Donnell enthused, “We learned today that President Biden is going to channel FDR and start having these fireside chats with Americans of all walks from life.... And that’s a new digital strategy that’s going to come from this website, these fireside chats from President Biden. So that was interesting.” Oh, well if the White House has a digital strategy to seem like Roosevelt, it much be true.

The Evening News anchor appeared on Monday's CBS This Morning. Asked about Hunter Biden’s big new book, O’Donnell again repeated Democratic talking points: “[The President] said, ‘I'm very proud of my son.’ I think he used the phrase ‘he's back.’ He got very emotional.” The journalist then naively said this about the scandal-plagued Hunter Biden: “The President told me that he did not know that the book was coming out. That he just learned about it recently. And he had just gotten the galleys in the last week.”

If Biden says he didn't know about his son's book, that's apparently enough for O'Donnell. During the Trump years, journalists questioned everything. Now it’s enough to simply accept the word of the Democratic administration. On February 2, Gayle King told Republican Senator Bill Cassidy we should just accept what Biden has to say on how much money he needs for COVID relief. 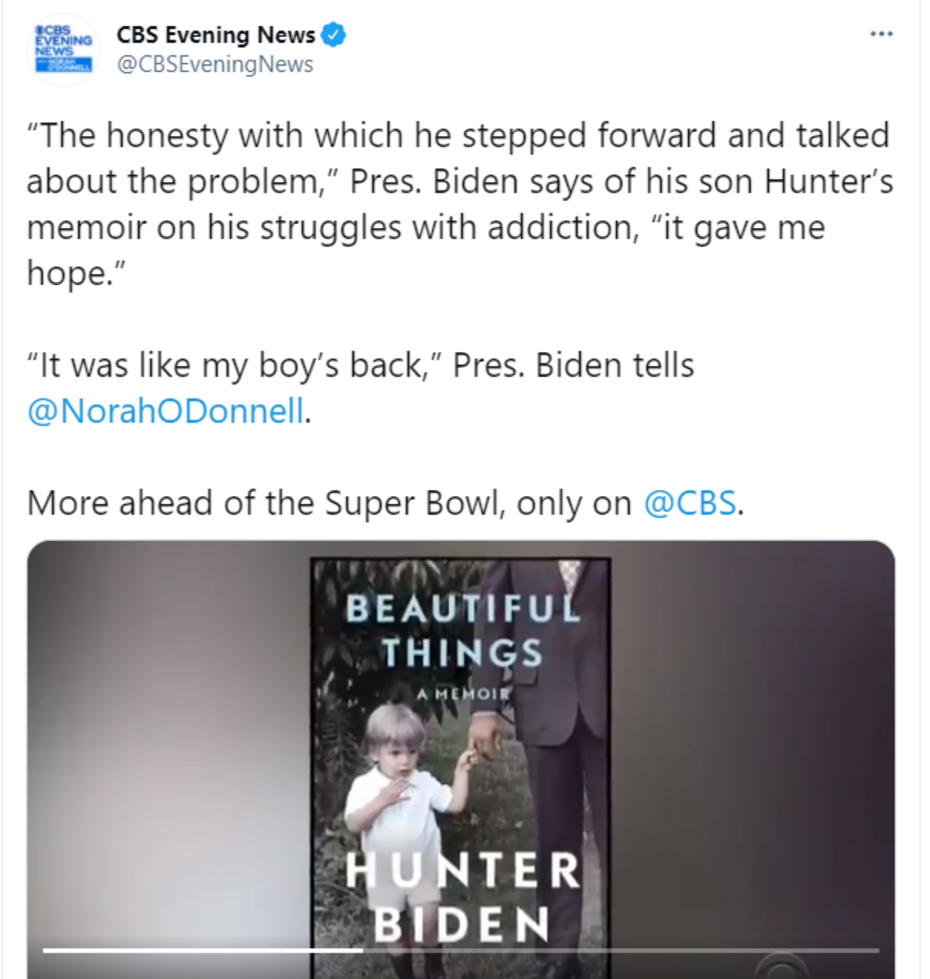 The hacky spinning for Biden on CBS This Morning was sponsored by Toyota and Popeyes. Click on the links to let them know what you think.

Transcripts can be found below. Click “expand” to read more.

NORAH O’DONNELL: Apparently President Biden is very partial to having all the fireplaces lit in the White House. He — I’m told he lights the fire himself in the Oval Office most morning even though there are plenty of butlers and White House staff in order to do that. And we learned today that President Biden is going to channel FDR and start having these fireside chats with Americans of all walks from life and to hear from them about the challenges they are facing and what they need. And that’s a new digital strategy that’s going to come from this website, these fireside chats from President Biden. So that was interesting.

ANTHONY MASON: And Norah O'Donnell joins us from Washington. Good morning. You've interviewed Joe Biden over the years many times. But never when he was president of the United States. This is the first time as sitting president. What stood out to you? What felt different if anything?

NORAH O’DONNELL: Well, I think President Biden now realizes and feels the weight of being a wartime president. You know, I said something like you've been in office for two and a half weeks. He said, “It feels a lot longer than that.” You know, I think there's the sense of really wanting to crush the Coronavirus, the world's problems that exist up there. I mean, he would say they're trying to clean up from the past administration. And so that's all part of what this White House is dealing with. You know, already this week, right, they're going to try and lay out school guidelines, the CDC, to get kids back in school. They are trying to encourage Moderna and Pfizer to ramp up productions. I've learned from sources close to the White House that the President is going to in the coming weeks visit either the modern production or Pfizer facilities in order to get a sense of that. And so they're really trying to project this idea of a competent president who's trying to push forward on this, and of course this week they're going to move forward on their own policy track while the Senate is going forward on the impeachment track.

MASON: On the COVID front talking about schools, as you mentioned, he said the CDC will release requirements to reopen schools perhaps as soon as Wednesday. Any sense of what — he talked specifically about reopening them safely, he paused to say that word. Do we know what safely is likely to mean?

NORAH O’DONNELL: Well, he's talking about getting teachers vaccinated, although not a requirement. He's talking about ventilation systems and social distancing and masks in classrooms. But look, you have Democratic mayors at odds with teachers unions in cities like Chicago, San Francisco, and other places. And so I think the question has been, you know, Mike Bloomberg, the former mayor of New York, said it's time for President Biden to stand up to the teachers unions and the teachers and get them back to school. It was something I asked the president about, you'll hear his answer tonight on the Evening News. But there need to be leadership from the White House, leadership, science guidelines from the CDC. You see -- in Chicago they've reached a deal. They're waiting for those guidelines from the CDC, that that could be the next step. “How do we do this safely? Can someone please tell us what we need to do?”

So that's what's coming this week. So there will be I think a lot of news from the White House on that front because schools, of course, a top issue. As the President acknowledged in the interview, the fact that kids are not in school, some 20 million kids, that means a lot of women are dropping out of the work force. And the president acknowledged this is a national emergency.

GAYLE KING: Well, Norah, congrats on the interview. I know you only had 20 minutes with the president. You covered a lot of topics. I'm curious if you got to ask about Hunter Biden's book? A lot of eyebrows are being raised. It’s called Beautiful Things, talking about his battle with drug addiction. People are wondering about the timing of the book considering his dad just got in the White House. Did you goat ask about that? Does he have any thoughts?

O’DONNELL: I did. We released that clip over the weekend. You know, he said, I'm very proud of my son. I think he used the phrase “he's back.” He got very emotional. The book is in many ways not only about dealing with his —  the loss of his brother, Beau, from brain cancer, but also about his own personal struggle with addiction and recovery. And so it's a very personal memoir. As the president said, he said, I don't know one family in America that doesn't have someone in their own family or knows someone who has dealt with alcoholism.”

O’DONNELL: The president told me that he did not know that the book was coming out. That he just learned about it recently. And he had just gotten the galleys in the last week.