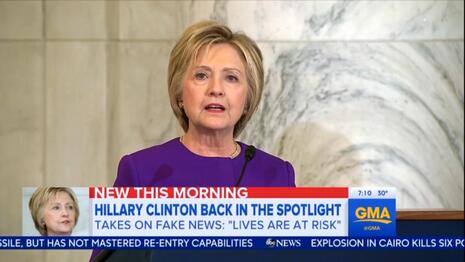 If the liberal media didn’t have double standards, they would have no standards at all. Although journalists now are angry that anyone would question President-Elect Joe Biden, ABC four years ago was speculating on Donald Trump being “delegitimized.” The network was also excited that Hillary Clinton wasn’t “going away.” Think they’ll feel the same way about Trump?

Absolutely not. You know, after that contentious 2000 campaign which Al Gore won the popular vote and basically disappeared after the election. That is not going to be the case, I believe, with Hillary Clinton. She won a big popular vote victory. Her people will tell you she got more votes for President than any white male in America. I don’t think she is going away. She remains the most prominent voice in the Democratic Party.

On the December 13, 2016 Good Morning America, analyst Matt Dowd wondered if the Russia accusations (to be debunked in the future) would “delegitimize” then-President-Elect Trump:

Well, looks like what Donald Trump has united opposition on this whole issue not only related to what Martha said to the cabinet pick, there’s going to be vehement opposition but on this issue it goes to, ‘Does it delegitimize Donald Trump's presidency at the beginning of it?’ He already lost the popular vote we know to Hillary Clinton and there’s been questions related to the election and now you have this situation which Donald Trump and his staff know is problematic for the integrity as he enters this office so it's going to be a big problem. Monday night when the electors meet around the country, there’s some question of, how many will abandon him in the course of this?