Cooper began by cynically recalling, “Seventy-nine years ago today, the country was reeling from the loss of 2,403 American lives at Pearl Harbor. Those deaths stunned the nation. There was understandable outrage and fury over the attack”

Now, the President doesn't seem concerned about being a wartime commander. If anything, he seems more like a deserter. He is absent. The American people have given him leave, voting him out at the ballot box, but he still has some weeks left. He has chosen to go AWOL. He has declined to join the fight against COVID.

It was just days after the presidential election that a CNN lied and pretended the network was seeking unity. An announcer proclaimed, “Our trust has been broken -- in our leaders, in our institutions even with some of our friends, and we are hurting. Now more than ever, we need each other -- to listen, to learn from one another, to rebuild those bonds.”

But now CNN is back to attacks on traitorous Trump and his love of death. Cooper concluded: “The self-proclaimed wartime president already announcing the terms of surrender in a war he never cared to fight because he could see nothing in it for himself, not even the credit for saving lives just by putting a piece of cloth over his face.”

The disregard for unity on CNN was sponsored by WeatherTech and Mazda. Click on the links to let them know what you think.

A transcript of the opening segment is below. 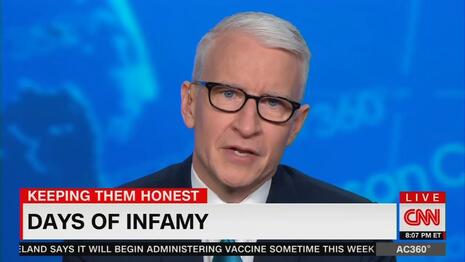 ANDERSON COOPER: Seventy-nine years ago today, the country was reeling from the loss of 2,403 American lives at Pearl Harbor. Those deaths stunned the nation. There was understandable outrage and fury over the attack.

President Roosevelt declared war on Japan the next day, called it a date which will live in infamy. Two thousand four hundred three American deaths at Pearl Harbor.

Right now, the United States is averaging more than 2,200 COVID deaths a day. That's nearly one Pearl Harbor every 24 hours. By April of next year at the University of Washington's Institute for Health Metrics and Evaluation projects the pandemic will have killed upwards of a hundred thousand more people in this country then all the American troops killed in three and a half years at the Second World War, more than half a million dead. President Trump is the one who likened this to a war. He called himself in fact a Wartime President. That was a long time ago. Those were in the days when he wanted to be seen as a Commander-in-Chief leading the effort when he took over the coronavirus press briefings and then stopped listening to the doctors who actually knew what they were doing.

Now, the President doesn't seem concerned about being a wartime commander. If anything, he seems more like a deserter. He is absent. The American people have given him leave, voting him out at the ballot box, but he still has some weeks left. He has chosen to go AWOL. He has declined to join the fight against COVID. He is not rallying anyone to wear masks. He's not talking about our dead, our hurt, our fear. Yes, it has been that way for months, I know.

But it is particularly galling given so many of us are now sick and dying. December 8, 1941, President Roosevelt said -- and I'm quoting here, "There is no blinking the fact that our people, our territory and our interests are in grave danger." He was spelling it out for us. August 14, 2020, here is what this President told Bob Woodward.

COOPER: It was not just a declaration of surrender, but a justification for having already surrendered months before. Worse, unlike FDR, this President did not make it in front of Congress. His words came in a private conversation. He didn't have the courage or the decency to tell the American people the truth that he was forfeiting. As far as he was concerned, he'd already done all he could, already checked out.

Since then, another 115,000 of our fellow Americans, many of whom supported and voted for the President as if that should even matter, but to him, you would think it might, have died of coronavirus. As of tonight, the count now stands at more than 283,000 with nearly 1,300 deaths reported just today.

On Friday, the President signed an order claiming today National Pearl Harbor Remembrance Day. It reads in part, "We solemnly honor and uphold the memory of the patriots who lost their lives that day." He had nothing to say, however, about the 2,879 Americans reported dead in this country of COVID the night before he signed that Proclamation, nor did he speak of the dead at his largely maskless rally in Georgia the very next day. How many of them might have survived if more had been done? If more of us wore masks, social distanced -- if the President really was a Wartime Commander. Instead, he claims nothing more could have been done and look at the shot there. See how the people behind him are not wearing masks?

You may recall that is different than what you'd see when he was on the campaign trail, when he still hoped to get your vote, before he lost the election. The campaign used to put people with masks behind him to at least pretend that they cared. In fact, they would give them masks often, if they didn't have masks of their own. They were -- they were pretending to do the right thing. They're not even pretending to care anymore.

It is now every man and women woman for themselves. And look, that's the way it's always been with this President and the people he has chosen to surround himself with. But it's more clear than ever. As for the dead, the only dead the President spoke of were the ones in his fantasies about the election he lost.

TRUMP: We know the Democrats had dead people voting and you've got to watch it. Dead people -- you wouldn't believe how many.

COOPER: Sure, that's how he speaks of dead people. He speaks lies of fake dead people and says nothing about those who have died on his failed watch.

He said nothing about the dead who might have voted if COVID hadn't taken them, nearly 1,600 deaths reported on Election Day. He and the people around him just don't care anymore. They are looking for other jobs as we've been reporting, looking to see how they can maybe salvage what's left of their reputations, while the President is certainly pondering his next moves and raking in a whole lot of money to let him use as he'd like. By claiming it's going to be for his battle against the election fraud that never was.

Take a look at ceremony today at the White House, the Medal of Freedom, hardly a mask to be seen nor any distance he had between the guests. The President, as you know, has boasted of being immune to the virus. As for everyone else? Does it look like he cares?

He certainly cares about getting credit for the vaccine. Less than a week after the election, he tweeted, quote, "As I long said, Pfizer and the others would only announce a vaccine after the election because they didn't have the courage to do it before."

When it comes to the vaccine, which is as far as his interest seems to extend, late today, "The New York Times" reported that the administration in late summer actually turned down the chance to buy more doses from Pfizer, which would have meant more vaccines available on day one. The administration denies it. The vaccine and could receive emergency use approval in a matter of

days, but the President shows no interest in doing or even saying anything that might keep more people alive to get it. Certainly not helping the Biden -- incoming Biden administration as much as they could. Not now, and perhaps not even up until inauguration. Not in August when he told Bob Woodward that nothing more could have been done and on April, months after he told Woodward, the virus was airborne and far deadlier than the flu.

COOPER: Yes, it doesn't look good. Huffing and puffing, after getting off a helicopter, after having left the hospital early after having COVID, that apparently is presidential in this President's mind, but actually just wearing a thin piece of fabric over your mouth and over your nose to protect others that is somehow not something he can do.

The self-proclaimed wartime president already announcing the terms of surrender in a war he never cared to fight because he could see nothing in it for himself, not even the credit for saving lives just by putting a piece of cloth over his face. Nearly 1,400 Americans die that day, in fact alone, which ought to live in infamy.